From S-town to Brentwood: NewsChannel5 Reports on Nashville's Gang Problems 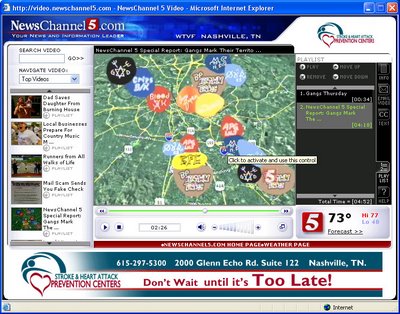 NewsChannel5 did a story last night on Nashville's gang problem that was overall pretty good and, aside from running some gangsta rap in the background at some points, did not seem to me to sensationalize the problem. In fact, the story did exactly what it needed to do: emphasize that gangs are are not simply the burden of neighborhoods proximate to Downtown. As a Metro Detective put it to reporter Amy Rao, "If I was to sit down and show you every confirmed gang member in Davidson County, I could pick out every neighborhood in this County."

While Rao did refer specifically to Salemtown's problems, she did not overdramatize them like some have. At one point the Detective showed a picture of one gang member and told Rao that he lived in Brentwood, the suburban land of four-car garages. If you look at NewsChannel5's map in the screen shot above, you'll see that the gangs are spread all over the map; that was a great graphic depiction of a problem that belongs to all of us who live in Metro. It's not just a problem for those of us in that red little circle superimposed on the North End (you can also click on the map to find the link to view Rao's report).

One slight inaccuracy in the piece involved Rao talking about Salemtown while video showed mostly Crip graffiti in Cheatham Place (to the west of Salemtown), which seems to have a more chronic and enduring problem with the vandalism. There was only one shot that I could identify as graffiti in Salemtown. We get hit, but most of ours comes down pretty quickly due to the Salemtown Neighbors neighborhood watch. Also, the commercial that runs on the NewsChannel5 website promoting the story is way over the top when the narrator says that gang members own our homes because they sit on their turf. I don't know whether that commercial airs on TV, but it stupidly glamorizes the turf battles. According to the report, there will be a second segment of the story on tonight's news.
Posted by S-townMike at 4/28/2006 03:30:00 PM