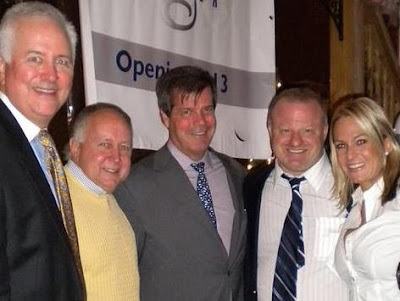 Yeah, take note of restaurateur Mike Kelly on one end and a big shot from the local franchise of a national temp labor corporation on the far side. More importantly notice the joy expressed by the men situated closest to Mayor Karl Dean: sign monger, Bobby Joslin, who would like nothing better than to install a bright LED or two in your neighborhood and Democratic Party insider and lobbyist Dave Cooley, who takes money to win political projects by trashing other people's good names. Just off frame and out of sight are the anonymous trolls Cooley uses to prowl the internet and win by any means necessary.

This is the image that I will carry into the voting booth with me in the next mayoral election. It's burned into my memory.