All's fair in this council war: Barry replicates Dominy's initiative to save the Fairgrounds excepting the racetrack

CM Duane Dominy is not pleased with Megan Barry (a member of the Metro Council Dean Team, which includes Ronnie Steine, Anna Page, Rip Ryman, and Sandra Moore, also referred by local reporter Joey Garrison as the "Gang of Five"). CM Barry is bringing a bill that essentially saves the Fairgrounds another year, which was the purpose of a bill CM Dominy sponsored and deferred on November 16. The main difference between the bills is that CM Barry wants to demolish the racetrack and CM Dominy does not.

CM Dominy sent a letter to the Nashville City Paper and to the Council office for distribution late today. The letter is reproduced below (click on the images to enlarge), but the money section is the paragraph where he points out that the "Gang of Five" not only showed discourtesy not allowing deferral of his own bill, but they voted as a bloc to try and table his ordinance (which would essentially have killed it). 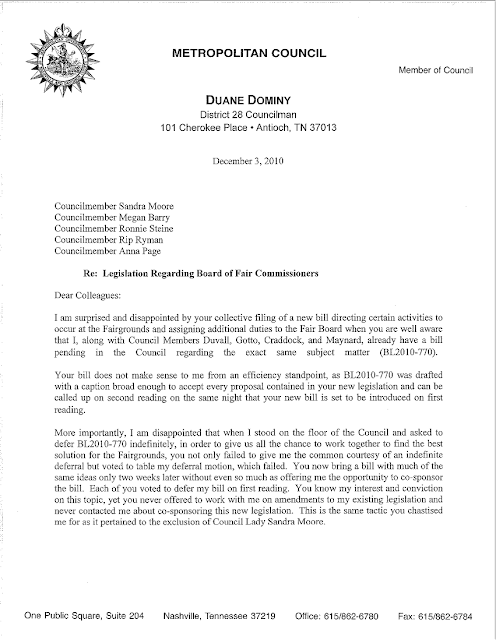 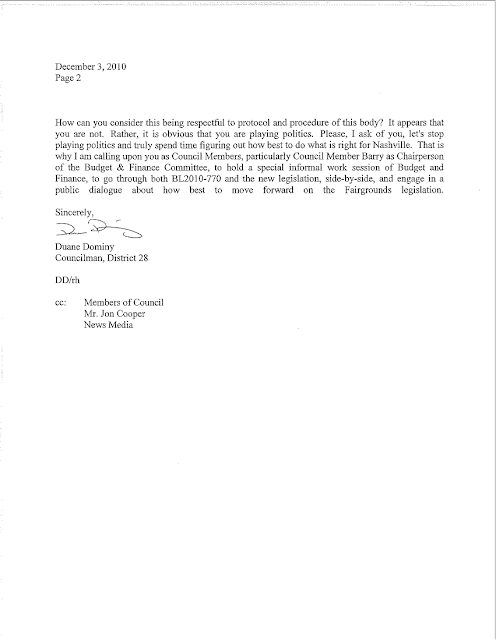 The council office e-mail to members is time-stamped 30 mins after the City Paper story reporting (but not reproducing) CM Dominy's letter appeared on the paper's website. A few minutes later Megan Barry replied by e-mail to the council membership, seeming to bristle about CM Dominy mentioning "courtesy," and she insinuated that his correspondence with reporters "hours before" she received the letter was an act of discourtesy.

It seems to me indignation flows both ways. Despite her statement to the Tennessean that the coterminous news of her bill and and of the executive memo stating the Mayor's plans were coincidental, the Gang of Five probably tag-teamed this bill with the Mayor's Office. Council action around big mayoral projects has moved like Secretariat, that is, like a "tremendous machine," since Karl Dean took office. To think that there was no behind-the-scenes action-coordination strains credulity.

I don't agree with CM Dominy on much, but I do agree that there is some Gang of Five hypocrisy (and I would add cynicism) here. They criticized Dominy for what they are doing with the latest bill, which not only resembles his, but compliments complements the Mayor's plans to privatize the Fairgrounds eventually.

Each one of the Gang of Five has advanced the Mayor's agendas with few questions asked the last 3 years, and this common commitment has meant an easy ride for Karl Dean up until now. For the new Fairgrounds bill not to be coordinated out of the Mayor's Office would be out of character. CM Barry would have to think us naive to believe that the Gang of Five and Mayor coming together so exactly was fortuitous.


UPDATE: In a pointed e-mail reply to Megan Barry's mockery of his "courtesy" last night, Duane Dominy counters that not only did she also go to the news media without consulting him on the Gang of Five bill on Thursday, but she also collaborated with the Mayor's Office in writing it. Dominy also reminds Barry that elections are over and he invites her to leave politics out of the Fairgrounds discussions. He also presses her again for a work session on the two bills together.

Like I said before, I would have to be a chump to believe that the Gang of Five did not work with Rich Riebeling and other Dean staffers on writing an ordinance the same day the Mayor's Office "called time out" on the Fairgrounds.
Posted by S-townMike at 12/03/2010 07:24:00 PM