You would think the Tennessean could at least put up a front to avoid the appearance of promoting Mayor Karl Dean, but they do not even bother any more. Even highly regarded, usually reliable reporter Michael Cass seems to have sold out with Sunday's seeming pulp circular awarding Mayor Dean Tennessean of the Year based on the most idealistic interpretation of his performance during the May floods and the convention center approval process.

This is a trend at the paper snowballing as we move closer to the next elections. Just like George W. Bush got his free ride from the national press after the 9/11 attacks, Karl Dean is getting fluffy and friendly treatment from local reporters since May. This is a point that Cass missed as he was busy parroting Dean deputy Greg Hinote's strained analogy to Allied Forces chasing Nazis across Europe (a slight upon the Greatest Generation). The Dean administration has been more like the Bush administration emphasizing loyalty based on false assumptions and embedding unquestioning reporters along its 2003 "Operation Iraqi Freedom" sweep.

A Tennessean op-ed by a PR specialist in May praised Hizzoner for the sheer volume of press conferences he was holding at the time while some of us were wondering where he was. Gail Kerr was waging her own editorial battles writing columns that amounted to love letters to the Mayor and hate mail to his critics. Reporters rarely asked critical or probing questions of the Mayor, but generally published whatever spin the Communications Office fed them.

The paper even declared Karl Dean a winner of the 2010 off-year elections, which were otherwise considered a loss for Tennessee Democrats. The editors did so without regard to the fact that the candidates the Mayor promoted, like Jeff Yarbro and Sam Coleman, were actual losers.

Sunday's effort by Cass looks like dictation taken from insiders who have a material interest in uncritical press. The one-sidedness of that account defies what some community leaders experienced in May. Cass seems to be trying to overwrite experiences that some of us remember of a bunker mentality in the Dean administration. In the wake of the destruction local blogger Jay Voorhees maintained our city has a kind of ADHD about responding to need. If so, then the Mayor's Office seems to be using the Tennessean to stimulate local memories in a direction devoid of truths that some of us refuse to forget.

I distinctly remember the Mayor laying low and putting news conferences and non-profits like Hands on Nashville (not mentioned once in Cass's report) between himself and the relief effort. HoN did a lot of good, but it also took a lot of heat from some of us that Hizzoner chose not to face: because private agency-led relief efforts lack the same broad coordination as effective public campaigns led by government leaders, neighborhoods outside of West Nashville did not get immediate attention.

HoN President Brian Williams, who deserved to win an award before Karl Dean did, lost his composure at news that neighborhoods were frustrated at the seeming neglect. Protest with low blows as he might, non-profits simply cannot be held as accountable like government can for delivery of flood relief to neighborhoods.

Even as East Nashvillians mobilized 1,500 volunteers on their own to rescue neighbors and bring relief to their community, they watched Metro resources head west. Karl Dean may be Tennessean of the Year at 1100 Broadway, but he had very little impact at Moss Rose or near McFerrin Park outside of photo-op appearances when, according to Cass, he decided to shed his "businesslike" style to get out and walk the neighborhoods where people suffered outside of business-as-usual.

My family enthusiastically participated in Hands on Nashville events, but we also remember the problems that Michael Cass glosses over. I watched TV reports of volunteers and Metro officials streaming into West Nashville, but then I drove Bordeaux neighborhoods that had huge piles of debris stacked at the curbs with no volunteers or Metro officials in sight. We took a car load of food and supplies to an Egyptian Coptic Christian community in South Nashville, where we saw few relief workers from Metro or Metro's non-profit contractors. It seemed like Metro-lead relief arrived late to and left early from poorer northern and southern neighborhoods.

We cannot totally blame HoN. As President Williams asserted to one community leader in an e-mail inquiry about accounting for actual volunteer hours, HoN "didn’t, can’t and shouldn’t manage all volunteers in an emergency."

Their role "is to manage those that can’t find a volunteer home." However, Metro is responsible, and the Dean administration used volunteer organizations as surrogate service delivery, which let the Courthouse off the hook for the difficult process of accounting to the dollar and to the hour Metro relief efforts, although they were pleased to stand before the news media with celebs and take credit for large donor checks to non-profits.

The thing is, I never saw the Mayor's "businesslike" approach give way to the Deliverer that the Tennessean is bound to turn him into. Less than a week after the 1,000-year flood, Karl Dean was on NPR whitewashing the destruction by claiming that 80-90% of Nashville was "untouched" by the disaster in an attempt to maximize future tourism revenue. It bears asking at this point: if only 10-20% of the city was "touched" by floods, why was the Mayor's performance heroic enough to be lauded as "Tennessean of the Year"?

Part of the Dean administration's problem is that he holds regular communities and the business community to different standards. They did it last year with stormwater fees. They seemed to be doing it with water rationing after the flood. Many of us followed their calls for water rationing even though we heard maddening reports of Downtown hotels using tap water to wash off door mats. I squealed to Metro Water on a Midtown hotel who had a parking lot island sprinkler on perpetually so that water ran off into a nearby gutter. Even so, the waste went on for weeks with no abatement. Part of what militates against giving the Mayor an honor on any other grounds but his own regal fiat is that his penchant for being "businesslike" intrudes on good governance.

But the preferential option for business only extends so far. Even in describing Dean's "setbacks" in ending the Fairgrounds as a public entity in the name of redevelopment and tax revenues, Michael Cass refuses any critical repartee with Hizzoner. Cass chants Dean's mantra on Expo flea market business owners, whom he says only oppose Dean because they have a "material interest" in their business.

And it never occurred to Cass to point out that the Mayor has a material interest in ending small business, converting the Fairgrounds to private real estate, and bringing in corporations who also serve as the potential campaign donors that small businesses simply cannot? And is it supposed to be an indictment of small business owners that they have an interest in the survival of their own enterprise?

The final, fatal blow against any presumption of pro journalism in Cass's reporting is the fact that he failed to add a disclaimer that his publisher donated $15,000 to the effort to lobby for construction of Hizzoner's acknowledged pet project, Music City Center. That project is one of the rationales Cass uses to justify calling the Mayor "Tennessean of the Year." There seems to be a clear conflict of interest in judging a statewide award for an individual whose capital campaign you contributed to.

But the paper does not seem too worried about appearances of impropriety, especially when they are not too concerned about their partial appearance of promoting the Mayor.


UPDATE:  The online version of the Cass article no longer has the Fairgrounds "setback" paragraphs on p. 4 that quotes Mayor Dean disqualifying flea market small business owners for having "material interests" in not being moved to make way for corporate development. I do not know whether they were removed intentionally or accidentally, but according to the original article, the Mayor was uncontrite and dismissive toward popular opposition to his plan. If I would have thought that the paragraphs were going to disappear, I would have taken a screen shot to keep it in the online record.

As you can see from the screenshot of p. 4 below, the current section title is practically nonsensical given the paragraph following. It's because the rest of the section has been removed from the page: 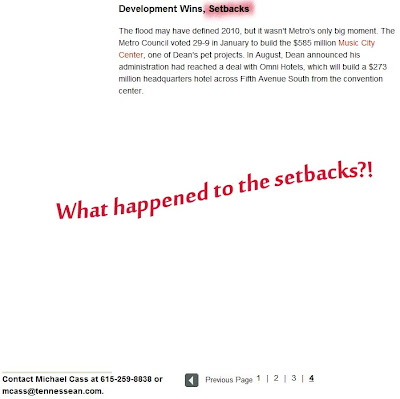