Has Gail Kerr been coaxed or coached to merchandise the Mayor's Office?

Last Sunday's column by Gail Kerr on possible challengers in the next mayoral election perpetuated the perception that the Tennessean writer is in no sense of the term an independent journalist, but a professional PR flack functioning as the sounding board of the increasingly powerful Metro government executive.

Karl Dean goes into the next election with a campaign machine firing on all cylinders. Those cylinders include his administration, the private sources of wealth and influence behind his administration, and the corporate media, which moves too easily between political parties, press, and PR enterprise. This synthesis, this syndrome of kingmaking is on display practically every time Kerr writes a column on Metro politics, every time the Tennessean neglects pushing ahead less than flattering stories about this Mayor.

However, perhaps it was never more on display than in 2008. Kerr's Tennessean was caught in that web between a prominent Nashville PR firm (founded by former pro journalists) and the Mayor's MDHA boys, who were vested with working with that firm (McNeely, Pigott, and Fox) to hard sell a new convention center to a Nashville community reeling in the throes of economic recession. At the time--with Tennessean reporters and columnist doing interviews and meeting with McNeely Pigott, and Fox spin merchants--it wasn't the paper that broke a story of huge Metro budget overages to MPF, but NewsChannel5.

And after the NewsChannel5 story broke, we found out that PR pros had huddled with Gail Kerr to coax or to coach (depending on whose interpretation you buy) a story favorable to Mayor Dean. I obtained a copy of the MPF statement billing MDHA for hours worked on selling the Music City Center to Nashvillians. I extracted the sections of the bill that include the hours spent on work aiding and abetting Kerr, and they are posted below (I highlight her line items and inset her picture): 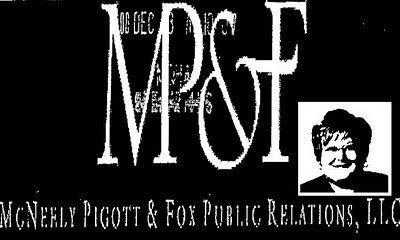 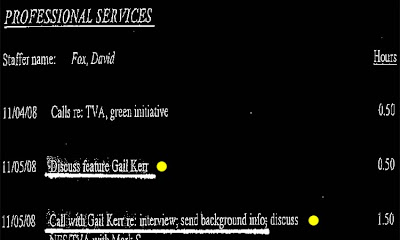 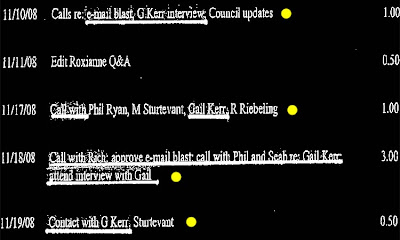 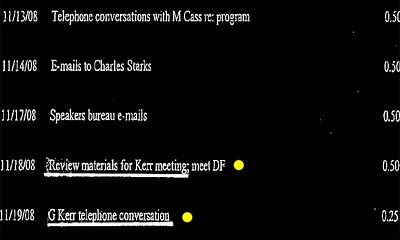 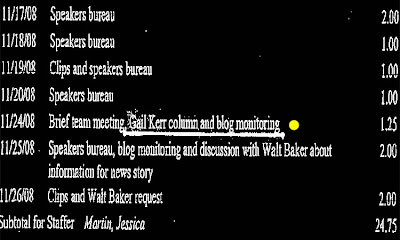 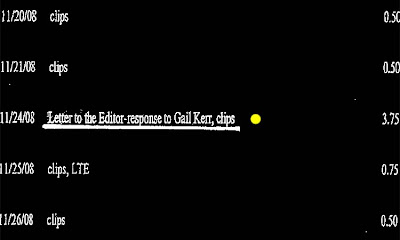 Was Kerr merely coaxed or coached? I have a hard time believing that if this were merely a matter of MPF working for its client Metro government to inform the media then so many hours would be spent with Kerr. Does it take more than a lunch or a couple of phone calls to inform a journo? Also, there seems to be at least one coordinated meeting between Kerr and major Metro players, MDHA's Phil Ryan and Finance Director Rich Riebeling. If MPF is only helping her with research, why have meetings with Metro officials, other than to make sure that everyone is on the same page? Coordination goes beyond education.

Finally, that manufactured letter to the editor does not pass the smell test for me. Even by itself a PR staffer paid to write a letter to the editor seems like a scheme that violates the community spirit of "Letters to the Editor." However, the appearance that the letter was synchronized with a lengthy series of prep events for Gail Kerr is even more unsettling. Was there ever a chance such a letter would be rejected, and thus an investment lost? Other investments were made. The marketing organ for Dean's capital project had received donations from the Tennessean. The newspaper had skin in this game, so what are the odds that a professionally prepped letter would be published? And later, the Tennessean endorsed the new convention center as if they were doing so merely on the merits, if not on principle. It all smells rotten.

We really should not look to Gail Kerr for an independent and reliable account of local politics. She is perhaps the most dependent, most unreliable of the bunch.
Posted by S-townMike at 12/14/2010 06:59:00 PM