Does the pollution of Browns Creek result from the race track or from larger Nashville negligence?

One of the claims I expect to hear over and over at tonight's council meeting during the Fairgrounds discussion is how the race track pollutes Browns Creek and that is the reason to support what is the first step in Karl Dean's plan to redevelop. That seems logical conjecture until one considers the huge watershed that feeds Browns Creek upstream from the Fairgrounds. This Metro map highlights in green the entire watershed of Browns Creek: 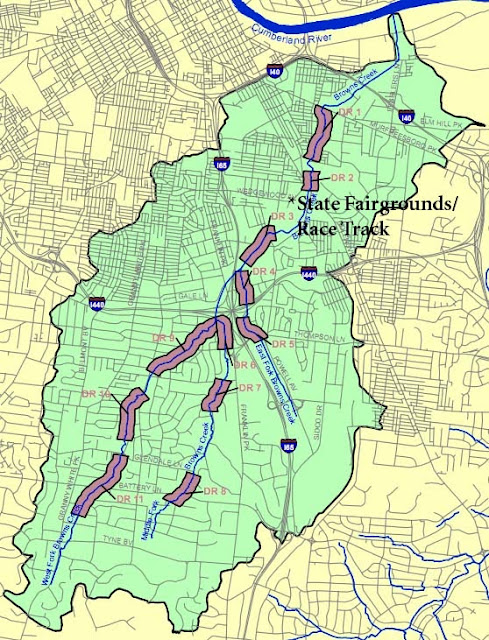 Upstream from the Fairgrounds, the two forks of Brown Creek cross residential, business, and industrial areas with their surface streets and stormwater run-off. They cross under a maze of roads that make up two interstate mixmasters, and the East Fork parallels I-65 closely from its headwaters near a large railroad yard.

With all of that distance Browns Creek has to travel in contact with the leavings of exponentially larger volumes of auto traffic than the Fairgrounds Speedway could ever produce, with its course through a web of streets and industrial nodes, including a rail yard, is it even feasible to believe that Browns Creek's pollution problem will be scrubbed simply by closing the race track as the Mayor's supporters--who will no doubt seem like a new waterkeeper alliance--will argue tonight?
Posted by S-townMike at 12/21/2010 04:48:00 PM