A 12South timeline: residents vs. developers

Two months ago, H.G. Hill Realty and Southeast Venture announced to the media plans to build a mixed-use four-story complex that will include one- and two-bedroom apartments in order to fill what they called "a much needed niche" in the 12South neighborhood. One commercial building and two old houses used for small commercial (the zoning is currently commercial) are to be demolished. This particular kind of growth has not brought the neighborhood together in support of the proposal. In fact, there is a group that has been organizing since January to fight the development team.

There seemed to be bad blood from the beginning. The co-owner of Blackbird Tattoo, one of the small businesses affected, told concerned neighbors:

In September 2011, we were informed that our building was most likely going to be demolished and that we should find a new building .... I do not know how we could have fought this ... in effect we WERE forced. We were told we could purchase our building for $500,000, an astronomical price for our small business.

A 12South blogger vented her frustration early in January:

I’m not one of those rabid listserv purists who goes nuts every time somebody proposes a new development in my neighborhood. And although the proposed construction project at 2310 12th Avenue South (the property between the 12South Taproom and Rumours Wine Bar) does appear a bit overblown and disproportionate at first glance (67 apartments and 4,200 sq. ft. of retail), I was ready to keep an open mind.

But when I found out last week that that the owners of the Rumours property right next door had exerted a little deep-pocket muscle on Rumours restaurateurs to strongly “incentivize” them to sell their lease with four years left, I felt frustrated and not a little bit angry. 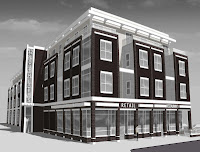 12South neighbors who are otherwise supportive of growth in their community utilized their elist to express incredulity at the deviation from community character and anger that the process seemed less-than-transparent in its early phases (it did not help that they learned about it in the media). Some expressed opposition to 12South becoming an "extension of The Gulch". Some pointed to the distraction of the holidays (introducing controversial zoning requests during holidays or vacation seasons is a time-honored ploy many developers use to mitigate public backlash). Some pointed out to the quality of preserving the older houses along 12South and wondered why the developers did not pursue other properties for sale along 12th Av S. Some objected to paving over properties with surface parking.

Even those who supported the project emphasized that the community should have a "constructive voice" in the planning of the project.

The frustration and ambivalence about developers extended deeper into January:

When the bulldozers come, I am going to weep shamelessly. And that means that suddenly, the stakes went way up for me. Consequently, I’m going to judge what rises from my favorite wine bar’s ashes much more harshly than all previous building projects here. It’s going to take a whole lot for what comes next to be a net gain for me, an improvement in my quality of life. And that’s kind of a big responsibility, You Developers. Please do well. And do good. Don’t make our little corner of the world worse.

The neighborhood association attempted to reassure members in an elist posting:

The 12South Neighborhood Association has some concerns about this large-scale project, and has been diligently working together and initiating discussions with the development team.

We want to assure you that we are actively involved in reviewing the schematic design and voicing the concerns of everyone in the neighborhood and adjoining communities.

We have called on the Metro Planning Commission and The Mayor's Neighborhood Representative, and have thoroughly reviewed the zoning/planning overlays for this property to ensure that what is being proposed is within the guidelines established.

Southeast Venture has agreed to listen to a smaller representative group from the neighborhood in the schematic design phase...and would also like to meet with the neighborhood at-large in a subsequent meeting to present the project to the community .... The initial meeting with Southeast Venture will include members from the 12South Neighborhood Association Board, the Belmont-Hillsboro Neighborhood Board, the Sunnyside Board as well as councilwomen, Sandra Moore from District 17 and Burkley Allen from District 18.

We are cautiously optimistic that our concerns will be heard while recognizing that from a practical standpoint we are not in a position to stop a project that meets current zoning and codes requirements.

The initial meeting occurred on January 20, and the officers emailed association members to tell them how they believed residents' concerns were addressed:


The major points of concern from the 12South Representatives & Council Representatives were:
Overall, the major concerns of the neighborhood were discussed and we are optimistic that they will be met as the design process moves forward. We will be working with SEV, HG Hill & Council-lady Sandra Moore in the coming weeks to schedule a neighborhood-wide meeting.

While officers met with developers, a group of residents held strategy meetings to recruit volunteers to fight the proposal.

Those aiming to fight the developers did not seem satisfied with answers they got back from the association officers' meeting with the developers. Dissent seemed to come to a head last week when an opposition letter signed about around 50 people in advance of the large community meeting was sent out through the neighborhood contact list:

We the signers believe the four-story, luxury apartments proposed for the sites of Middle Tennessee Roofing, Rumours Wine Bar and Blackbird Tattoo are a poor fit for the 12th Av So neighborhood. First, the vehicle traffic associated with 95 living units plus retail, all moving through a single 12th Av entrance, will exacerbate already-stifling 18 hour per day congestion. Second, the size and privacy of the structure will dwarf historic landmarks, obstruct viewscapes, and foreclose integration of the business district center with the larger community. Third, the gentrification entailed - upscale, gated, high-turnover rentals replacing small businesses and manageable leases - will reverberate in higher costs-of-living and diminished diversity throughout the locale.

The structure is planned for dead center in the old-and-new community. In the immediate vicinity of 12th Av intersections with Elmwood and Caruthers are “worthy of conservation” ... churches, commercial buildings, school, and homes, including the Rumours and Blackbird cottages and many residences in the Belmont Hillsboro Conservation District west of 12th. For three decades, entrepreneurs and residents have invested heavily in these buildings and in the prospect of “new urbanism” based on century-old development patterns.

While the precedents cited above do not legally constrain new construction, they are socio-economically compelling. They suggest the following responses to the proposal:

Last December developers told the media that construction would start in April. It looks like they may have a showdown with their new 12South neighbors before the groundbreaking. It seems to me that they should have started having larger community meetings months ago about this, especially if they are seeking rezoning from commercial to mixed-use. Public hearings at planning and council meetings can always turn nasty with controversial developments that do not strive for transparency and compromise.
Posted by S-townMike at 2/26/2012 11:38:00 PM