A baseball fan blogger with Yahoo's contributor network lists the upsides of stadium upgrades in the home city of the Texas Rangers, but I am much more interested in his criticisms, given perpetual calls in Nashville for a new ballfield:


First, the city of Arlington could add a mass transit system. I know they'll never do it but it sure would ease traffic a little on game days and give more fans a chance to go to a game. And don't bring up moving the Rangers to Fort Worth or Dallas. It's a ridiculous notion considering that right now the team is centrally located in the metroplex allowing equal travel time for fans all around. If Arlington can't approve a city bus line then maybe the "T', the train line between Fort Worth and Dallas, could add tracks and a station near Cowboys Stadium that would also be within walking distance of the Ballpark.

I also recall that when I, a citizen of Arlington, voted on the bonds to build the new park back in the early nineties we (the residents) were shown pictures of the stores and restaurants that would be built nearby and along what later became known as Mark Holtz lake. The lake is still there and it's possible to build some restaurants and bars along it a la the San Antonio Riverwalk. It would be nice to give the area a downtown feeling allowing fans to walk around after games and enjoy some night life rather than be stuck in traffic for an eternity.

Arlington, Texas (which also happens to be my childhood home) is perennially listed among the worst places for mass transit, the biggest transportation nightmares, the bottom tier of places you would want to live in an oil crisis. Being built in a suburb on top of a prairie without urban density in sight (save for the buildings enclosing the outfield stands intended to project urbanism), there was huge potential and there were lots of promises of economic development that has not happened in 20 years.

Transportation and quality economic development are questions that nip at the Sulphur Dell proposal. Build a ballpark on the old Sulphur Dell site and common sense tells me that road-choking traffic will come. Without a strong transit option we will be facing extended asphalt for parking, fans taking up neighborhood street parking, and limited access during each home game. A lack of plans for sustainable transport will endanger any vision we have for walkable neighborhoods as our streets become even more suited for privately owned cars than they already are.

The unrealized promises that came with the Ballpark in Arlington for economic development also show us that it could be decades before a Sulphur Dell ballpark produces economic development that tantalizers like CM Jerry Maynard dangle before North Nashvillians. We are not told that chances for development simply increase with a ballpark; we are told that development is a sure thing, even though the Greer Stadium development desert itself stands as a glaring local counter-argument. And we are not even talking about quality economic development at this point. The last thing any of us needs is more of what Hope Gardens is about to get: development anchored by a bail bonds business.

Despite the validity of these questions, Sulphur Dell proponents simply refuse to deal. That silence mars their vision as far as I am concerned. They have yet to get serious and sober about the realities and risks of ballparks. The discussion about Arlington's baseball details ought to prompt us to treat transportation and development as front-end priorities instead of wishful afterthoughts.


UPDATE: here's a photo I took in 2007 during a visit to the Ballpark in Arlington. It shows the buildings built to enclose the outfield and create the impression of a dense urban setting. 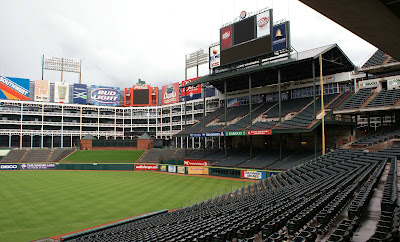