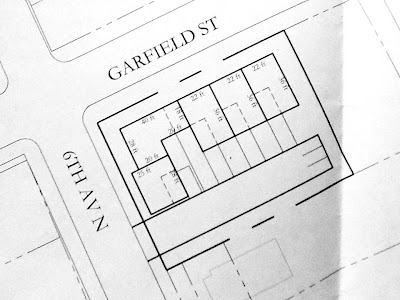 I attended the Metro Planning Commission meeting earlier this evening. I was going to fill out one of the paper slips they ask those who are going to speak in the public hearing to fill out just in case I wanted to speak. When planners found out that I might speak against the rezoning, a couple of them seemed to take an interest in why I might try to have it pulled off the consent agenda (the agenda which allows the Commission to pass several items at once without discussion).

I talked about my concerns, particularly the one I spoke of earlier today that the addition of parallel parking on the driveway might make for the suburban appearance of cars parked in front of homes. The planners said that there is a buffer designed into the plan where builders can put trees and shrubs or a fence between the driveway and the adjoining property.

One of the planners also went into the meeting room and pulled out former CM and current developer Roy Dale to talk with me about their designs. He gave me the sketch above and told me that there would not be parallel parking along the driveway, and that all of the spaces would be marked behind the building. I told him that was my biggest concern at this stage and that I would not have it pulled from the consent agenda for public debate.

As you may be able to see from the sketch, the buildings look like they also have several square feet in front for plantings or small yards. That should mitigate the distance offset of the other homes on 6th. I told him that I thought that generally the rezoning is consistent with the both urban design and the community plan. I also expressed no opposition to higher density at the intersections.

I also learned that, after discussing whether or not to install decks in back of the homes, the developers are probably going to leave them off to allow buyers who want to have small gardens to do so. Mr. Dale also assured me that the development team will be having more community meetings to allow us to give feedback on design and materials. If they follow through on that promise, it will be above and beyond what they are required to do, but it would be a constructive gesture toward Salemtown.

Incidently, planners told me that someone else had called them this week with concerns about the impact of on-street parking after the build is finished.

With no one else present wanting to speak on the rezoning, the Planning Commission passed it unanimously on the consent agenda.
Posted by S-townMike at 2/23/2012 06:18:00 PM