Public hearing on Salemtown development this evening at 4:00

I am still undecided as to whether I will speak for or against developer R. J. York's request to rezone properties at 6th Av N and Garfield street for higher density townhouses at this evening's Planning Commission public hearing. Unfortunately, the development team, which includes former council member Roy Dale, did not meet with the community but once. Even then they were nebulous about the site plan other than describing it in standard high-density terms.

One significant question for me arises from a Metro planner's conclusion that the request includes the removal of parking from lot frontages, which creates a more walkable neighborhood. The lot does not have access to the alley in the back, so the developers are proposing a driveway from the front. However, that driveway is wide enough to allow parallel parking, which seems to me to bring cars to the front. Here is how the planner responded yesterday when I asked about access:


a driveway from a street frontage will most likely be necessary to account for the lack of alley access. Any proposal for driveway and parking will have to meet the standards of the Zoning Code (chapter 17.20), which is administered by the Metro Codes Department. A driveway serving multiple dwelling units is normally 24 feet in width. Parallel parking on a driveway is one of the options offered by the Zoning Code for parking space orientation along a driveway. 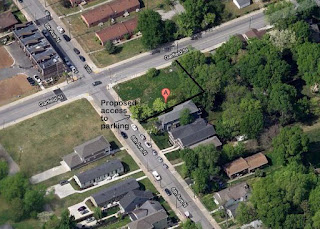 Developers I've met generally (with a couple of exceptions) do not concern themselves with issues of walkability or pedestrian-friendly design. Instead, they are concerned with maximizing bodies and vehicles per square foot to get more bang for their buck. So, I do not expect to hear the development team address sustainable issues in parking this evening.

However, I am concerned that allowing parallel parking toward the front will have the same effect as having surburbia-style driveway placement. Is this not conflicting with the character of urban neighborhoods outlined in the North Nashville Community Plan?


UPDATE: Metro Planning's person working on this rezoning emailed me a few minutes ago with a response to my follow-up on my question about parallel parking in the proposed driveway:


For the site at 6th and Garfield, the RM20-A zoning district would not permit the placement of parking between a building façade and a street-side property line.

Note that in the satellite photo above the south side of the lot, where the driveway is set to be placed, will open up to the small front yard of the house next door. If the plan calls for the townhouses to have small front yards (unknown, but unlikely), and if those front yards are roughly the same size as the adjoining property (extremely unlikely), then parallel parking to the front of the building façade will not be seen from 6th across the adjoining front yard. Hence, the urban character will be assured.

However, if developers maximize square footage and put the townhouses against the 6th Av property line at the sidewalk, any vehicles parallel parked in the proposed driveway will give the lot the appearance from 6th Av of a suburban-style parking configuration. I guess if the developer plans a privacy fence against the adjoining lot, then the suburban-style problem would be solved.
Posted by S-townMike at 2/23/2012 09:32:00 AM