You may remember Mack Cooper as the former Bredesenista in so much hot water that he was demoted without recourse to public knowledge of the exact nature of his alleged harassment:

In swiftly demoting his chief lobbyist, Gov. Phil Bredesen proved that his administration will not tolerate workplace harassment ....

Bredesen provided no detail last week as to what persuaded him to demote Robert "Mack" Cooper. The governor's statement concerning the matter said little more than he "will not tolerate any form of harassment."

The only notes taken during the course of the investigation were shredded by chief investigator Kae Carpenter, who acknowledged that the notes could have become public under the open records law.

One of the booster groups of education reform and privatization, Stand for Children - Tennessee, apparently did not think so slightly of Mack Cooper to curb themselves before hiring him as one of their lobbyists [source: Tennessee Ethics Commission]: 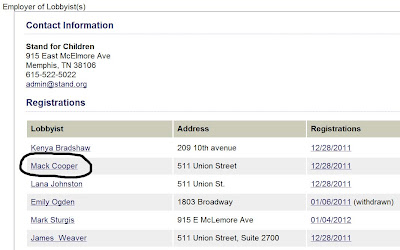 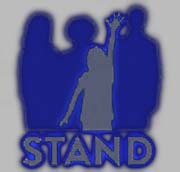 Stand for Children - Tennessee has not tipped their hand yet with regard to Nashville schools, focusing instead on Memphis schools. However, they are still listed as the "advocacy" division of "One Nashville" an arm of the education-reform obsessed Nashville Chamber of Commerce that enjoys VIP status at Metro Nashville Public Schools, particularly with Director Jesse Register. Moreover, in other parts of the country they seem hell-bent on backing legislation that scapegoats teachers, promotes school vouchers, and redistributes public money to shadow-government private boards.

So, even in the uncertainty of the moment, a public school dad like me is very concerned about how hard SFC is willing to push these hot-button privatizing issues in league with a hired gun who has a morally ambiguous, inscrutably cloudy background to the degree that even Phil Bredesen--a governor who made "pragmatism" paramount to the slightest bleat of a call of duty--demoted him.
Posted by S-townMike at 2/16/2012 10:47:00 PM