Brentwood council member arrested in close proximity to North Nashville public schools, but not charged with the proximity code violation

I have obtained the affidavit and arrest warrant of CM Brady Banks, who was charged last week with soliciting sex in a North Nashville hotel during a police prostitution sting. The details are in the document I post below. Click on the image to enlarge: 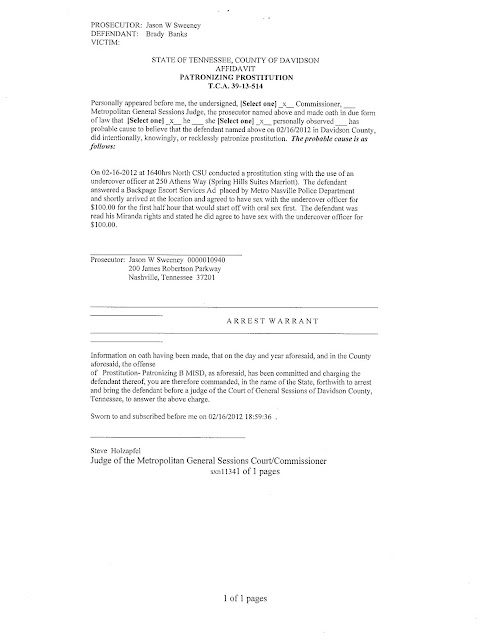 The law (TCA = "Tennessee Code Annotated") cited in the affidavit distinguishes between "Class B" and "Class A" misdemeanors; the latter prompting a stiffer penalty of at least 7 days of incarceration due to the illegal solicitation occurring within 1.5 miles of public schools. Metro Police charged CM Banks with the less severe misdemeanor, which allowed him to bail out of jail within hours of his arrest:

(a) A person commits an offense under this section who patronizes prostitution.
(b)  (1) Patronizing prostitution is a Class B misdemeanor.
(2) Patronizing prostitution within one hundred feet (100') of a church or within one and one-half (1.5) miles of a school, such distance being that established by § 49-6-2101, for state-funded school transportation, is a Class A misdemeanor.
(3) A person convicted of patronizing prostitution within one and one-half (1.5) miles of a school shall, in addition to any other authorized punishment, be sentenced to at least seven (7) days of incarceration and be fined at least one thousand dollars ($1,000).
(4)  (A) Patronizing prostitution from a person who is younger than eighteen (18) years of age or has an intellectual disability is a Class E felony.
(B) Nothing in this subdivision (b)(4) shall be construed as prohibiting prosecution under any other applicable law.
(c) As used in subsection (b), "school" means all public and private schools that conduct classes in any grade from kindergarten through grade twelve (K-12).

There are 2 public schools roughly within .5 mi of the hotel where Brady Banks was arrested:


There are 3 more public schools within a 1.5 mile radius of where Brady Banks was arrested:

I do not understand why Metro Police charged the Brentwood council member with the lesser charge. Maybe some of you legal types can help me understand what I am missing here in my reading of the code, which seems straightforward. Should Brady Banks have spent 7 days in jail with a "Class A" misdemeanor before his release or not?