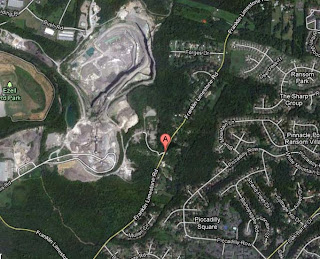 Around two dozen people showed up at Tueday night's Metro Council public hearing to fight a bill sponsored by their conservative council member Duane Dominy--and recommended unanimously by the Metro Planning Commission--to allow a third asphalt plant built adjacent to their neighborhoods on Franklin Limestone Road. Here are some of their comments:

We're just a working class neighborhood .... We have two asphalt plants, a dump, an airport, and rock quarry. That's enough. Let's put this one somewhere else.

-- A worker living next door to current rock quarry

When I bought my house my Realtor® took me around by Murfreesboro Road so that I wouldn't see the industry .... Now I'm a single parent. I am in foreclosure. I've had difficulty working with the challenges of this economy and the banking crisis. There aren't many interior design demands today. With the existing quarry I'm in trouble. If we have more industry, I really need to move but I can't afford to.

In the beginning [at the first community meeting] we started with 35 dump trucks coming in to Franklin Limestone. The second meeting we went from 35 to 75. I heard him say tonight that there was probably 90 movements.

I wasn't notified. My Treasurer went to the last meeting and he asked Duane Dominy if he notified me. He didn't. Or our association. He notified a couple within the 200' or whatever the minimum is, and he asked him to do it, and he said he would: he would notify all of the residents in the Piccadilly Square Homeowners Association. He never did that.

-- President of the Piccadilly Square HOA

I've taken care of children who deal with asthma, and it really boggled my mind .... I called the councilman and said, "This is a bad idea. How could you put an asphalt plant in a residential neighborhood?" When we talk to parents of kids with asthma we tell them, "Avoid smoking. Avoid irritants." Some of you have children ... grandchildren and elderly neighbors. Would you put your child near an asphalt plant? It doesn't make sense. These kids would continue to have wheezing.

-- Pediatrician who lives in near the quarry

I voted for Duane Dominy to stand up for this community in times like this and to represent us for our best good .... I think he's a great guy ... but we feel like we've been abandoned on this project .... You can bring the big boys in and they can represent the different aspects of it but none of that has been proven .... We haven't received any factual evidence of any of these things that have been said for it.

-- Treasurer of the Piccadilly Square HOA

I like to go outside and play, and I use Franklin Limestone Road every day when I go to school ... and I like to have my window down because I like to the feel the air and I don't want to have to breath all those toxic fumes and get risk of cancer or any type of disease.

If we lived in a world where everything was equal, CM Dominy's rezoning request would be on life support after that beating. Association officers, business owners, the working class, victims of the housing crisis, a mobilized kid; even a pediatrician took on Dominy for possibly exposing kids to high toxicity levels. Unfortunately, the council is not a world where everything is equal, and this bill now passes into the Vice Mayor's committee chamber of horrors to give it the air of legitimacy sans developers before it heads for third reading and likely final passage. But it seems to me that Duane Dominy is now willing to squander any working class cred he built during the fracas over the Fairgrounds on the fat cats of asphalt production.

Oh, and there should be a special place in hell for anyone who promotes projects that expose children to toxic chemicals to which they would not expose their own children.