In the past few weeks, details have been finalized for a cohousing community in North End's Germantown neighborhood at the corner of 5th Av N and Taylor St. According to the New American Village Facebook page, approximately 20 homes and a "common house" (for social gatherings, meals, etc) will be built, and there were 32 people on the "interested list" a little over 2 weeks ago. According to the Nashville Cohousing website, the homes will be priced on the lower end of the "going rate" for Germantown: $150,000 - $300,000, depending on the size of the units.

Cohousing is a type of collaborative housing in which residents actively participate in the design and operation of their own neighborhoods.

Cohousing residents are consciously committed to living as a community. The physical design encourages both social contact and individual space. Private homes contain all the features of conventional homes, but residents also have access to extensive common facilities such as open space, courtyards, a playground and a common house.

It appears to me that one of the reasons the Germantown site was chosen was that it is a walkable community proximate to coffee shops, restaurants, farmer's market, a public park, and a greenway. This is validation that the more Metro government funds and maintains infrastructure to support sustainable balance, the closer attractive, community-orient development follows. 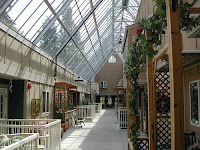 Before we spend public money on stadiums and convention centers we should obligate revenues to supportive infrastructure in walkable neighborhoods to spur this kind of smart growth. Metro government could be the trendsetter instead of forever following behind developers.

A friend who attended one of the organizing meetings for the Germantown site told me that she was extremely impressed with the potential of the development. I cannot help but believe that this will be a net positive for our small part of Nashville.
Posted by S-townMike at 3/16/2012 05:06:00 PM