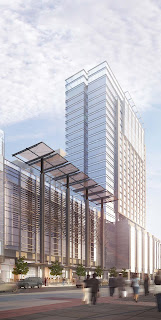 I'm hearing from an informed source that the new hotel, due to the architecture, is not going to be as energy efficient as assumed. I will be interested to see how they market it as such.

The Music City Convention Center itself was slated to have a predominantly green roof in the planning stages, which was consistent with what Nashvillians said they expected during community meetings on the proposed facility. But it is news when developers follow through with the concept promised without pressure, and Karl Dean gave signals early on that there would probably be cuts to the green roof.

Sure enough, the developers cut the green section of the roof from 70-something-percent to 20-something-percent, so it sounds like more of a green hip or drip edge than it does a "green roof". Undeterred by the underwhelming shrinkage of green, Hizzoner is now promoting solar panels for the roof (paying an energy company $125 per hour to install) and calling it "a roof is unlike any other roof that has ever been built in Nashville".