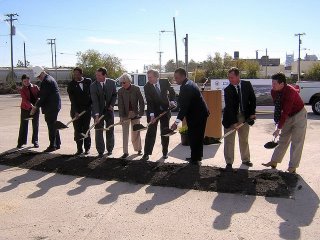 Mayor Bill Purcell, Council member Ludye Wallace, long-time Germantown resident Berdell Campbell and some Metro Water muckety-mucks broke ground this morning at the new site of the biosolids treatment center near the Cement Plant on 2nd Ave., North. Since cement production occurs so close by, the place was practically a dust bowl, with dust devils blowing in the audience's faces as the proceedings went on. Most in attendance were "Suits," which will make for substantial dry-cleaning bills during the next week.

The Mayor gave a short speech surveying the progress Metro has made on solid waste treatment since he first took office. He referred to Germantown and the smells neighbors there have put up with over the years due to archaic and ineffective treatment of solid waste.

I guess I should have let the Mayor's office know that at least a couple of us from outside Germantown would be in attendance, too, so that he could have mentioned the smell folks in Salemtown and Buena Vista have put up with as well. The S-town residents living on 3rd and 4th have it worse than anybody.