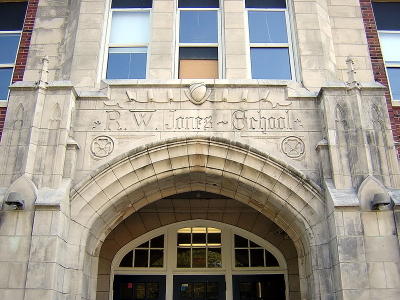 Then again, that was a long post and you may not have read it. However, the Jones Paideia PTO President, Helen Koudelkova, did read it and contacted me to say that she is spear-heading a group of concerned citizens and neighborhood leaders from the North End in order to "fight this closure with everything we've got."

Ms. Koudelkova also tells Enclave that the contractors working to renovate the school building for next fall were a-week-and-a-half into the renovations when they got the order to stop on November 9th. She reports:

In that time, they removed the steam heat system and all the A/C units. What this means is that, in its current condition, the building could not be reused for any other purpose without the school district making a substantial capital investment to replace those systems (approximately $400,000 according to a mechanical engineer I consulted), which - in the current fiscal climate - is highly unlikely. My fear is that if the renovations do not go forward the building will sit abandoned and quickly become derelict.

That's exactly my fear, too. It's right there in your Newtonian laws: bodies at rest tend to stay at rest. If they close the Jones School building to education, chances are good that it will never open again to education, or if it does, it will be used as just another urban container for social service projects that should be farmed out to suburban communities. Bodies in motion tend to stay in that motion: once they start tearing out its facilities, momentum to tear the whole thing down is a breeze.

Private economic development is exploding around the North End now, and we need our public centers, like schools, libraries, and parks to balance development and keep it in check. The local neighborhoods like Salemtown, Jones-Buena Vista, Germantown, and Hope Gardens need a functioning, operational, and thriving Jones Paideia to stay right where it is as an anchor holding us steady even as the uncertain currents of development attempt to toss us here and there.

Helen Koudelkova will be speaking about saving Jones Paideia from its own School Board at the Salemtown Neighbors neighborhood association meeting on Monday, November 28 at 6:30 p.m. at the Morgan Park Community Center (Hume St. and 5th Ave., North).
Posted by S-townMike at 11/20/2005 11:58:00 PM