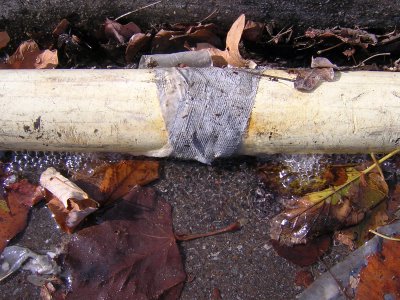 Metro Water Services has been tearing up streets around the North End during the past month, replacing 100 year old pipe and individual water mains. When they do that they have to lay PVC pipes in the storm gutters to bypass water from the hydrants to each individual house, while they dig up the street. When they laid pipe in front of my house a little over two weeks ago, one section had a hole in it that they patched with Homeland Security's favorite remedy, duct tape.

For two weeks clean, drinkable Metro water spurted out from under the duct tape and down the street into the storm sewer. But this is where two problems converge. 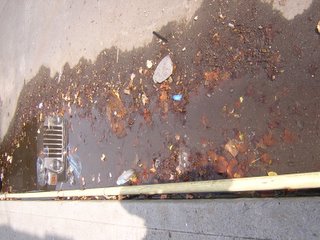 Metro Water is aware of a runoff problem in front of our house due to a previously poorly leveled asphalt patch that causes the storm gutter water to back up; they have promised me that they will "mill" the patch to encourage water run-off. Having not milled it yet, water stood in front of our house for two post-duct-tape weeks.

I wish I could say that one positive that resulted from the total waste of resources from treated water piped literally into the sewers was a cleaner Cumberland River (since our storm sewers flow there). But the ponding in front of our house caught all manner of garbage thrown from passing cars or construction workers, and it became a bird bath that starlings relished and defecated in each morning. Mosquitoes may have bred there for all I know. So by the time the water eventually made its way past the asphalt patch, it probably carried all kinds of interesting micro-organisms with it to the river.

And there is still the problem of watching Metro dollars wash down the gutter and into our sewers that bugs me. It wasn't like the problem was out-of-sight, out-of-mind, either. I saw all stripe of Metro Water employee walk or drive by the duct tape job at various times during the two week period.

So, a week ago I started working on this post and I took the pictures of the duct tape and the asphalt patch you see above. I then got in my car and ran some errands. I got back and I found that the duct taped pipe had finally been replaced and the water had stopped spurting, gurgling, and flowing. The ponding had dried up by the weekend.

Now, I'm not saying that the Metro Water workers on the street saw me squatted down over their jerryrigged pipes taking pictures and that they felt compelled to finally stop the total waste of resources. And I'm not saying that they might have felt concern when I took a picture of the trashy pond at the curb. I'm just saying, ya'll ...
Posted by S-townMike at 11/09/2005 12:30:00 PM