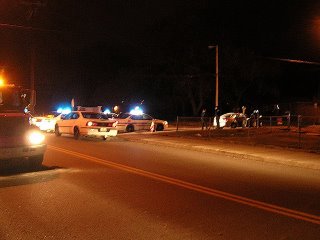 News you probably won't see on any of the mainstream news stations tonight at 10:00, because I saw no other reporters around: just before 6:00 this evening I happened upon the scene you see in the picture above: six or seven police cars, lights flashing, blocking the intersection of 6th Avenue North and Garfield Street. As I reported on Enclave last Tuesday, this was an intersection where police helicopters buzzed after a report of a shooting was called in (which later proved to be false).

I asked a patrol officer standing at some distance what was up. He told me, "Gangs, guns, and drugs." When I asked more details, he told me that occupants of the silver compact car (at the right side of the picture, surrounded by police officers) were arrested during a traffic stop (traffic stop opponents take note) after the car was found to be loaded with "gang members in from the east visiting their peeps." He didn't specify whether "east" meant Cayce Homes or New York City. Officers also reportedly found unspecified drugs and "big guns" in the car.

The officer asked me how it was that I lived in the neighborhood and didn't know about the gangs. I told him that I knew about the gangs, but that we had been assured by a police intelligence officer (at a recent Salemtown Neighbors meeting) that they had no connections to national gangs outside of Salemtown. He gave me a look that I can only describe as "like I was speaking in tongues and pig latin simultaneously."
Posted by S-townMike at 11/19/2005 06:30:00 PM