The Coming Divorce Between the Titans and Nashville Just Leapt Closer

This hastens that fateful day when Tennessee Titans ownership moves the team out of Nashville. It represents the third generation of football stadiums: the largest single span arches in the world, the largest retractable end zone panel in the world, the world's only roof-suspended football scoreboard media panel--600 tons, mind you--that stretches from 20-yard-line to 20-yard-line, and a veritable playground for those with fat wallets. It makes LP Field look more like tinker toys than ever. And it relies on public funding and attracting more superrich into its 15,000 premium club level seats with attached restaurants and bars.

The Cowboys were the trendsetters for the last generation of NFL stadiums, too: they imported the concept of luxury suites and maximized prime seating into the game, unwittingly making the Oilers' move out of Houston and into Nashville years later inevitable. But, as Dallas reporter Michael Granberry observes, that generation of stadiums fundamentally changed the game from a class equalizer (where everyone generally paid the same parking fees and ticket prices and ate the same hot dogs) to a class divider where the gulf between a local community's haves and have-nots widened with the luxurious stadium amenities going to those who could afford them. The sport disconnected from the working class roots of its pool of talent.

The Dallas Cowboys' new $1 billion stadium--to be finished by 2009--is not only "state-of-the-art." While it prises the class gap even farther, it also compresses time for every other city that has a football team: bringing closer that day when owners will begin to hold it up as leverage to get their own. And the Adams Family will be no different. They will want their own $1 billion stadium and they (or whomever they sell to) will come calling on Metropolitan Government again to help finance it, while marketing it to the superrich of Williamson County. 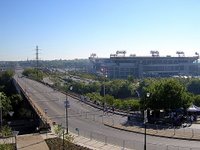 I don't see how Nashville can pay that price again; there was too much acrimony the first time around and too many costs under the bridge since then. And too many Nashvillians cannot even afford to attend games with their families in the cheap seats (an archaic misnomer), let alone walk those lavish, climate-controlled concourses studded with flat panel screen monitors. Even the hallowed "game-day experience," the holiest of holies on autumn Sundays, has become more like the Iroquois Steeplechase and less like a bunch of working stiffs loading up the pick-ups and meeting before the game.

So, I don't see the political will to ante-up in Nashville when the Adams Family comes calling wanting a Texas-sized marvel that will only widen the gap between rich and working classes in Middle Tennessee. Enjoy this little affair with the Titans now, Nashville, because Dallas just guaranteed that we and our tinker-toy field are living on borrowed time.
Posted by S-townMike at 12/15/2006 08:12:00 AM