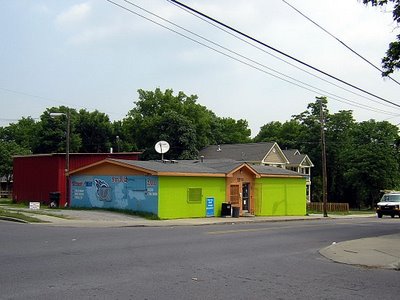 On the same day that the K & M Market at the corner of 7th and Garfield (where the store owner was shot 8 days ago by a suspect still on the lam) reopened to peddle its primary product of single serve beers, Salemtown Neighbors Neighborhood Association voted unanimously to support Council Member Erica Gilmore's bill to prohibit the sale of single-serve 40 ounce bottles of malt liquor. That bill was deferred by CM Gilmore indefinitely in November, although she spoke of plans to bring a revised version back up for consideration.

The K & M Market's primary product ain't Chicklets. It seems to be single-serve beer, which some here in the neighborhood believe is being sold to underaged drinkers. At the very least, the Market has become a place where thugs loiter and harass pedestrians and where some other illegal activity has been witnessed.

I did some searching around the Metro Planning website tonight, and I found out some rather interesting details about the three properties at 7th and Garfield across which the market sits. While the current use of the land is for a convenience store, all three properties are zoned "R6," which entails "medium density residential, requiring a minimum 6,000 square foot lot and intended for single and two-family dwellings." Yet, there are no occupied residential dwellings that I can see around the K & M Market.

Another interesting detail is that all three properties are owned by Kenny Norman, who was once the Juvenile Court Clerk described by the Nashville Scene as having "a reputation—deserved, by most accounts—for being an inaccessible, politically driven and incompetent administrator." But Mr. Norman--whose mailing address is in Goodlettsville--looks locked into a slew of very influential power brokers. His sister is Circuit Trial Judge Barbara Haynes, whose husband is State Senator Joe Haynes from Goodlettsville. Their son, Scott Haynes, is an attorney with Boult Cummings, served as co-chair of Kenny Norman's campaign, and has connections with former mayoral candidate and Congressman Bob Clement.

Some here in Salemtown have expressed the wish to see the Market either stop selling 40s or be closed down as it has been more of a nuisance and danger to the neighborhood, but I have to wonder if that could ever happen with the current owner of the properties.


UPDATE: Contrast the Planning Department's online information that the owner of the land on which the three properties sit is Kenny Norman with this 2005 Enclave post reporting that the Nashville City Paper listed the old building as a "New Business" owned by Abdoalfath Alkaifi. In that same post, I also linked a 2004 Tennessean story that the building was raided for illegal gambling and I referred to neighborhood sources who told me that alcohol was being sold in back of the "New Business" before a beer permit had been approved.
Posted by S-townMike at 2/25/2008 11:26:00 PM