Baseball ... serves the same purpose as a revolution in Central America or a thunderstorm on a hot day ... A tonic, an exercise, baseball is second only to Death as a leveler. So long as it remains our national game, America will abide no monarchy, and anarchy will be too slow. 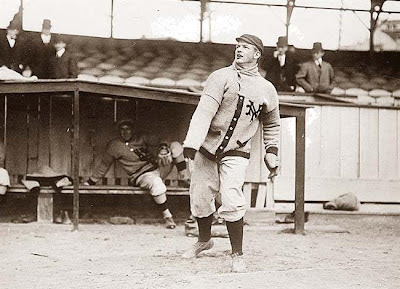 The greatest rite of passage in American sport started today as pitchers and catchers reported for Spring Training. Pictured above is New York Giant pitcher Christy Mathewson, who shut out the Philadelphia Athletics in 3 different games spanning six days in the 1905 World Series with his team wearing classy all-black uniforms. It had to be one of the greatest pitching performances in any World Series ever. He was inducted posthumously into the original Baseball Hall of Fame class in 1936.
Posted by S-townMike at 2/14/2008 10:35:00 PM