McCain calls the Keating scandal "my asterisk." Over the years, his opponents have failed to turn it into a period.

MSNBC's Jonathan Alter is mystified that the media continues to ignore John McCain's ride for a fall with the deregulating sons of bitches (a.k.a., the Keating 5) who generated the last financial crisis our country faced: 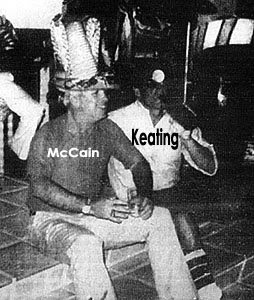 It's not just that opponents haven't made enough of the interference that McCain ran for Keating's savings and loan, it's that the press has not paid enough attention to it or to the party lifestyle that John McCain enjoyed in advance of a financial collapse that cost taxpayers $124 billion as of seven years ago. Party on, John.

Why hasn't the press made hay of his part in the scandal? Arizona Republic reporters Dan Nowicki and Bill Muller indicate that it is because John McCain endeared himself to the media:

McCain's hobnobbing with the press had an unexpected side effect. Reporters started to like him.

McCain always returned phone calls. He showed up for his television appearances. He was willing to go off the record to help reporters unearth certain stories. He answered questions bluntly, without much political tap dancing.

For Beltway reporters bored with bureaucrats, McCain was fresh, new and different.

"Everybody in town," Clarke said, "from the makeup artist at the local news station to the producers and directors, every reporter and every editor, loves working with John McCain because he does not stand on ceremony; he has no airs."

And now John McCain is cashing in on the brown nosing he did with the press all of those years after the humiliation of the Keating scandal. He responds to last week's stock market crash as if he has been a regulation advocate all along instead of a party-hopping patron of high finance, and the press won't even bring up Keating 5.

The only lesson that John McCain learned from the savings and loan scandal of 2 decades ago was how to game the so-called "liberal" media to get them to ignore his character flaws and his unethical connections to the ruling class.
Posted by S-townMike at 9/22/2008 11:25:00 PM