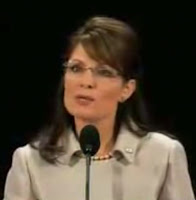 Tacit acknowledgement by the McCain Campaign that Sarah Palin is in this way over her head:

At the insistence of the McCain campaign, the Oct. 2 debate between the Republican nominee for vice president, Gov. Sarah Palin, and her Democratic rival, Senator Joseph R. Biden Jr., will have shorter question-and-answer segments than those for the presidential nominees, the advisers said. There will also be much less opportunity for free-wheeling, direct exchanges between the running mates.

McCain advisers said they had been concerned that a loose format could leave Ms. Palin, a relatively inexperienced debater, at a disadvantage and largely on the defensive.

Maybe they could also demand an oversized velvet pillow to recline on and a servant with a large pink ostrich feather fan to keep her cool.

If she is not prepared to free-wheel with a U.S. Senator, should we assume that she would also beg shorter question-and-answer segments when negotiating with the Russian President or the North Korea's "Eternal President of the Republic"?
Posted by S-townMike at 9/22/2008 08:26:00 AM