Thanks to Belle Lowe Newton, President of Woodlawn Area Neighborhood Association, for CC'ing me her letter to CM Charlie Tygard protesting the final draft of his LED ordinance (not much different from the controversial first draft), which was rubber-stamped by the LED task force for introduction in Metro Council:

The Woodlawn Area Neighborhood Association is most dismayed with the final LED draft ordinance and want to go on record with our strong opposition.

The fact that this ordinance will open up of every zoning district in Nashville to the possibility of LED signs is shocking and appalling. In reading Section 17.16.140, which describes the general conditions that all special exceptions have to fulfill, we now know that we would have to refer to these conditions to show the BZA how an LED sign negatively affects our homes, property and neighborhood. These include not adversely affecting other property to the extent that it will impair reasonable long-term use, and protecting persons and property from erosion, flooding, fire, noise, glare, or similar hazards. We are further disturbed to learn that although the BZA has the latitude to determine that an LED sign could be detrimental to a neighborhood, the fact that the majority of a neighborhood opposes such a sign would not be the determining factor in whether a sign of this nature is erected.

Of even greater alarm is that we feel you are so out of touch as to how the majority of taxpaying citizens feel about this extremely important issue. Stewart Clifton made the remark that you had convinced him that people really do want the signs. He said that "once they see it they will probably get used to it and ignore it. Since some signs look so bad now the LEDs would be an improvement." While this statement might be slightly paraphrased, it epitomizes what many citizens feel is wrong with Metro Government right now and that is an attitude of “we know what’s best for them” and that couldn’t be farther from the truth, especially with the LED issue.

Excuse me, Mr. Tygard, but it appears that many Metro Councilpersons are not voting the voice of their constituents and we urge you to reconsider this draft before taking it any further with the Metro Council.

The overwhelming majorities of many of our neighborhood associations believe that the city should be LED free, but, if you insist on having them, please resign these gaudy, atrocious signs into the remaining commercial, office, and shopping areas and allow agricultural and residential need to stay LED FREE.

We oppose LED signs in neighborhoods even with the protections described in the draft ordinance. 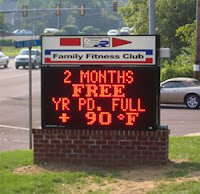 And, please know that we clearly understand the difference between these signs with all their protections and video signs. We know that you are not trying to put moving video screens on every street! I am attaching an example of a monument type sign that would be generally similar to what the proposed ordinance would allow. Even if it isn't as gaudy as the sign on I-65, it is still inappropriate in a neighborhood and even the less commercial areas around town.

We don't think a monument type LED sign with amber letters is appropriate for neighborhood even if it does turn off at 10 PM, and we are concerned about enforcement since there are over 50 signs that have been determined to be out of compliance with the existing ordinance.

To us, your way of thinking is like allowing a monster in our neighborhood. You think you can appease us by restricting the hours that the monster can live amongst us with his fiery eyes and restricted dress. Make no mistake, a monster of this nature, at any hour of the day or night, will not be welcome.

Listen to the taxpaying citizens, please. We don’t think you’re hearing us.

Thank you for all that you do for our fair city. We do appreciate your efforts very much, even though we strongly disagree with you on this potentially disastrous issue.