Have you ever been in a conflict with someone who says, "Look, this is just a miscommunication," while all the while you had this gnawing sense that there was something more fundamental, going beyond communication, that was wrong with the relationship? That is sort of the way I feel this morning reading Gail Kerr, who gives Mayor Karl Dean the mainstream media's megaphone to make his case about the motives behind changing the Riverfront plans.

Kerr seems to want to assure us that this is just miscommunication on the Mayor's part and nothing more to be alarmed about. Her interpretation of the Dean administration--who, she gushes, "has done a lot of things right in his first term in office"--seems designed to blunt and dilute any criticism that it is either inept or imperious on balancing growth with infrastructure that is in the common interests of Nashville's neighborhoods.

Keep in mind that this is the same Gail Kerr who christened Republican Senator Bob Corker a savior for scapegoating the Big 3 auto unions without considering the possibility that nonunion auto companies were also listing and looking for bailouts from their homelands. So, whenever Ms. Kerr gushes, you have to take it with a grain of salt. My sense is that the Mayor's office badly botched handling some control that he unilaterally decided to assert over the Riverfront plan, but the problem here is not just the handling of the process, but the imperial pose this Mayor strikes about issues involving regular Nashvillians.
And Ms. Kerr misleads readers when she spins this into an "East Nashville" controversy. The intention clearly stated at three forums held two years ago was to develop the Riverfront in such a way as to erase the distinction between the Downtown and East Bank sides of the Cumberland River. The stated purpose was to draw the two sides closer to the concept of an organic whole. And those forums were not held exclusively in East Nashville, and the perceived stake-holders were not strictly East Nashvillians. The participants came from all over Davidson County. I attended them myself. 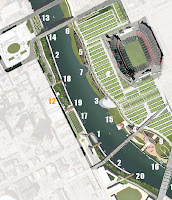 By using the cover of economic slump to suggest that the East Bank may have lesser priority than the Downtown side, the Mayor is effectively prising the concept of a Riverfront whole into its constituent parts once again. I am concerned that he is sundering the unity between Nashvillians--whether bearing east, west, north, or south--that came out of those forums. By portraying the blowback that the Mayor is getting now as hurtled from a bunch of outraged East Nashvillians, Gail Kerr seems to be carrying the Mayor's water, even as it looks like she is criticizing him for mere "miscommunication."
In the end, there is nothing in Kerr's column that suggests to me that Karl Dean is making a responsible attempt to clear up confusion and divisiveness that his administration engendered last week. It all still looks posturing and evasive.
Representatives had already made two contradictory public statements on which I chewed last week.

The riverfront redevelopment plan was completed over two years ago. [The Mayor's MDHA appointee] is now going through a public process of determining if what was set out two years ago still fits the needs of our community today. That was the purpose of the community meeting at East Park.

Mayor Karl Dean is committed to each of the projects envisioned by Nashville's original riverfront redevelopment plan but believes some may have to be built later than expected due to the economic recession, a city official said today.

To those you can add these statements in this morning's Kerr column:

Dean says he understands [CM Mike Jameson's point that East Nashvillians are angry that they participated for months in a process that may be overruled by the Mayor]. His announcement, he said, was not that the plan was changing. It was that he intends to include $20 million to pay for it

The mayor said [East Bank development] still may be built first, but it may not.

If we accept Gail Kerr's premise that Dean's mistake is a mere bump in the road of communication between Mayor and constituents, then we have no reason to be alarmed by the ambiguous, confused, and mutable conditions that he is creating on the Riverfront. But I have this gnawing sense that the problem here is more fundamentally about fiat and concealment than it is about dissemination of information.
UPDATE: The Riverfront Plan blog looks at the Mayor's latest back track via Gail Kerr (that is that his announcement was not of a change but of the $20 million) and asks some obvious questions:

If that's the case, why did MDHA ever call the public meeting? Why did MDHA ever propose an alternative, more expensive sequence which just happens to push to the bottom of the list the project the Mayor has been bashing at wine&cheeses around town? If Mayor Dean is committed to all 19 projects, if his office is really just concerned that the current plan "still fits the needs of our community," and if all he was going to announce was that he was putting $20M into his capital budget to fund it, why has he asked for more time to consider it? Why hasn't he just come out and publicly committed to implementing the original Riverfront Plan?