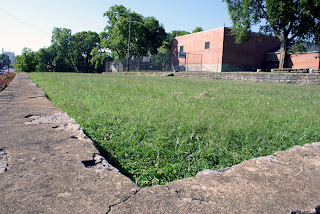 The past 3 years are littered with a string of broken Metro government promises on upgrades to Morgan Park, particularly with respect to the installation of a new playground for the neighborhood children. I find it particularly vexing to watch upgrades go up in parks at other ends of the compass in Nashville and wonder whether the delays have simply to do with a lack of will to provide for kids in the North End.

Here is the frustrating timeline for Morgan Park playground promises:
Please write CM Erica Gilmore (erica.gilmore@gmail.com) and please contact the Mayor's Office of Neighborhoods and find out what they've done with the new playground that Morgan Park was promised for so long.
Posted by S-townMike at 7/21/2009 11:29:00 AM