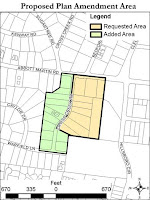 A week ago a local media apologist for infill development criticized Metro council members who opposed the May Town Center proposal without trying to place new urbanist developments in their own districts. He mentioned the Valerie Crossings proposal for Green Hills as an example of a high-density project that should find council support.

According to an e-mail from CM Carter Todd published today on the Nashville Neighborhoods e-list, the Valerie Crossings developer has decided to "indefinitely postpone" the project. Thus, the August 13 Planning Commission hearing of the proposal has been canceled. CM Todd also wrote that he will indefinitely defer the bill at the August 6 council meeting.

I don't think that we should underestimate the role neighborhood leaders might have played in leveraging a delay given community ambivalence toward the project. Council members should not simply draw in any high-density project without reference to public feedback or community character.
Posted by S-townMike at 7/29/2009 09:56:00 PM