Fairfax County, Virginia is the home of Reston Town Center, which Nashville's May Town Center developers use as the "model product for comparison." According to one former Fairfax Planning Commissioner, the low-density green belts surrounding Reston are at risk of being lost to urbanization because of the very goal that MTC developers tout as a primary reason for sprawling across the Cumberland to Bells Bend: higher tax revenues for the entire community.
In his comments we may be getting a foretaste of things to come should May Town be built:

For decades, two fundamental planning principles governed this part of the county. The comprehensive plan has long envisioned urban employment centers in Reston and Tysons Corner, with a low-density residential buffer in between. Moreover, from the time of Robert E. Simon’s original plan for Reston, there has always been a greenbelt preserved around that planned community. Reston’s highest density is in the Town Center, and development is tiered or scaled down toward its outer edge. On the north, east, south and southwest boundaries of Reston, there is low-density residential development — homes on large lots ....

Urbanization violates both principles. Such an action would change the character of Fairfax forever.

Adding higher density development - commercial or residential - would add thousands of vehicles per day to roads that cannot handle today’s demand. Rail and other forms of mass transit would offer little relief, as these low density potions of the county are miles from the existing or proposed “silver line” stations - a distances no one would walk. Moreover, 65 percent of vehicle trips are non-commuting; they are trips to the grocery store, soccer practice, church and other destinations for which rail is not an option. Bus service would be prohibitively expensive, as would the right of way and constructive costs for miles of new roads.

Schools serving these areas are already at or near capacity and cannot handle additional density. A change in the plan would not only tip the first of many land-use planning dominoes, but it would trigger expensive demands for parks, police, fire and other public services.

Reston Town Center planned and built green belts just like May Town Center plans conservation easements that they assure will be enough to guard against further urbanization of Bells Bend. Yet, the Virginia situation indicates that that the temptation to sacrifice more undeveloped and low-density land to more commercial and residential development only intensifies once urbanization starts. Increasing density increases demand for expensive services and tantalizes more developers to request new zoning with the easy promises of more tax revenues if given the same sort of exceptions that the Planning Commission might make for May Town Center.
Approving May Town both sends Nashville down a slippery slope toward total urban saturation and sets a precedent for future growth as barriers to development disintegrate. If the Planning Commission gives Tony Giarratana and the wealthy May family the opportunity to build even the most limited city on Bells Bend, every ill that goes with urbanization will follow any benefit. Once we break Bells Bend we bought it; and there will be no do-overs for the huge green swath.
UPDATE: The issues of increasing revenues and the loss of some supposedly protected open space to a proposed indoor recreation center are also causing some debate around Reston Town Center. Again, Reston is the blueprint for Nashville's May Town Center. Greenspace is prone to being nibbled to death by urbanization once the growing, denser populations decide they need these amenities and those amenities. 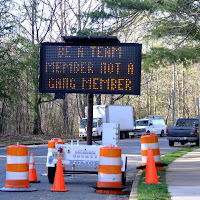 LATER UPDATE: Bells Bend doesn't currently have a street gang problem does it? Build those bike paths and the gangs may come.

Apparently, Reston police dedicated more resources to cutting gang-related activity almost in half so far in 2009. And when police dedicate more resources, the extra revenue has to come from somewhere. But I thought these Town Centers were supposed to generate, not consume, revenues?
So, does the Scottsboro/Bells Bend community want the gang-related activity that might follow high-dense, urbanized bike paths?
Posted by S-townMike at 7/16/2009 06:44:00 PM