Here Rich Riebeling comes to save the day:

The board approved a plan that will layoff off five Parks workers, while also asking Metro Council for an emergency appropriation of $850,000. More workers could face layoffs in the near future, as the Board will decide in the coming weeks how to cut $200,000 from its recreational and cultural wellness programs.

A parks board member kindly sent me the details on staff cuts as well as some rather cryptic references to line item cuts that make me wonder how programming at the community level will be affected. It's great to hear that park-level staffers are not going to lose their jobs, but are the patrons of our parks going to lose community center hours and programming options because of this schedule of budget cuts? 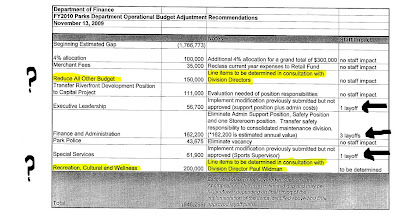 It's only fair to ask, did the Mayor's office put this much effort into convention center budget line item cuts when MDHA allowed the intangible public relations budget to run hundreds of thousands of dollars overbudget?
Posted by S-townMike at 11/16/2009 09:39:00 PM