Mayor's Office takes near north Nashville out of TDZ

Originally the state and Metro Council approved a Tourist Development Zone to capture extra sales taxes for the proposed convention center with a northern boundary of Jefferson Street, like so: 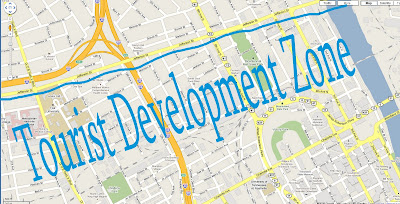 This made no sense to me, since convention goers wouldn't be likely to stray too far north of Downtown. It's not like Farmers' Market is a tourist destination; it's mainly for the locals.

However, the Mayor's Office has recently proposed to shorten the northern reach and extend the western reach of the TDZ to pay for the Music City Center:

The seven-member building commission Thursday approved new boundaries unveiled by Metro Finance Director Richard Riebeling that exclude these areas, establishing the Cumberland River as the eastern border, Charlotte Avenue as the northern boundary and the Interstate loop as the southern edge.

The zone’s western border, meanwhile, has moved approximately two miles down active West End Avenue, as project leaders aim to collect revenue from the numerous hotels that dot the corridor. Collectively, the territory now encompasses 2.8 miles, but it exempts car dealerships and other businesses that clearly don't cater to tourists.