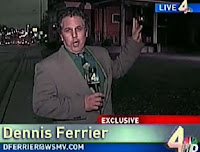 so she conducted some investigative interviews on her own and comes back with info you won't see on Channel 4:

When I met with the [Metro Police] officer whose name was given to me by all parties involved, he believed this was much ado about nothing. The sign was taken off the property by one of the owners; the sign was retrieved by the candidate to whom the sign belonged after Metro was contacted. I asked him if the sign was damaged, he said, “No.” He was surprised that this story made the news because by the time the story aired he had already closed the case ....

After speaking to Ms. Wilkinson, Mr. Wilkinson, Ms. Johnson, the property manager, several metro officers, the painter, the baker and the candle stick maker, I question how much time was invested in researching this story by the media when it was originally aired. What made this story appealing to run with half the facts is ... Ms. Johnson voting for the rezoning of Metro school district[s]. Some folks in the African American community, especially those that can remember attending raggedy schools that were not equal, have not forgotten that vote and the emotions that surface whenever this matter is broached were played upon in the reporting of this story. For people of color, the media should not be allowed to use those passionate feelings about the Civil Rights era to pit one against the other over and over again.

Ferrier describes himself as "fair without always being nice," but was he merely full of sound and fury signifying nothing in this case?
Posted by S-townMike at 11/30/2009 11:09:00 PM