SouthComm reporter Joey Garrison appeared to be the first reporter to call the District 5 results even though only 3 votes separate challenger Jamie Hollin from recalled incumbent CM Pam Murray. I called the Metro Election Commission around 8:40 p.m. and asked them if the unofficial results (542-539, Hollin) broadcast on Metro Channel 3 represented all the votes cast. The official who answered the phone told me that the results were unofficial because there still might be uncounted provisional ballots yet to be received. So, it appears that the City Paper's initial headline was more of a rush to break the news first without consideration of possible provisional ballots: 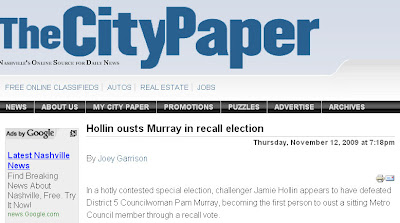 After the question of the rush-to-judgment was raised on Twitter, the CP lords quickly tweaked the headline to be less a projection that Hollin had won: 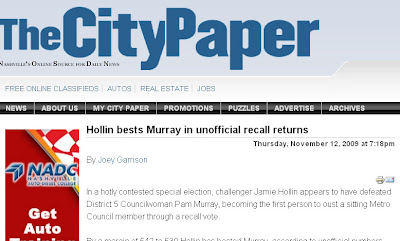 This looks like the election is going be a long drawn out process to me, and we may not know who wins for some time with a 3-vote-margin preliminary result and possible ballots still uncounted.
Posted by S-townMike at 11/12/2009 08:57:00 PM