Will sign the petition for a more democratic Metro budget process 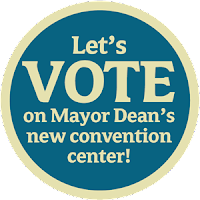 Mayor Dean has motivated me to do something I never thought I would do: support a referendum on an individual Metro budget item, albeit the largest capital project in Nashville history. I'm going to sign the petition that with enough signatures could leverage public input into this project.

I have two reasons for setting aside my general aversion to budget referendums and signing this petition. One is that no attempt has been made by the Mayor's Office to seek public feedback or to inform through the use of community meetings. It's been all top-down nose-thumbing. My second reason for signing this petition is that it is clear now that other Metro services are going to be cut in order to build a new convention center. Further stripping down limping Metro programs that more closely serve the local community than the Music City Center will is bad policy and it's detrimental to our quality of life.

I am not opposed to the idea of a convention center, however, I have serious reservations about this one. Yet, I believe the Mayor's Office could care less about listening to questions about their "signature project." If like me you have reservations or if you have stronger misgivings about the project as it has manifested itself, please click on the blue "Let's VOTE ..." button to download a petition, or e-mail me to sign the petition I've downloaded. This initiative will need over 25,000 legitimate signatures to be considered.

Disclaimer: despite my support for this petition, I've received no payments or gifts in exchange for posting Nashville's Priorities images and supporting this movement. I'm passing it along as a public service. The project deserves more public input than has been allowed.
Posted by S-townMike at 12/14/2009 10:54:00 PM