Keep an eye on Rich "Wink-and-a-Nod" Riebeling; he's planning to cut your services right out from under you 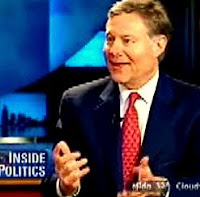 Bruce Barry made this observation about the Metro Finance Director's appearance on a local news media broadcast in light of the $14 million that will have to be drawn from other Metro line items to pay for the new convention center:

Asked about this little $14 million-per-year hiccup by Pat Nolan on NewsChannel 5's Inside Politics last weekend, Metro finance director Rich Riebeling admitted that the city is "going to have to find another source to finance those projects." When Nolan pressed him on how this will play out in next year's city budget, Riebeling said with a wry smile that "we've got a long time before we start the budget process." Clearly the administration is hoping that taxpayers won't grasp the cause-and-effect link between convention center approval now and costly budget maneuvers later.

I noted over the weekend that the North End is potentially affected since some of the Metro dollars that could go to the convention center might come out of the Farmers' Market. Bruce points out that some subsidies--like the funding earmarks for the Nashville Predators and police overtime obligations for special events--are untouchable, which makes the Farmers' Market and other community-oriented services more susceptible to an approaching Riebeling revenue raid. If you don't observe and stay sharp, he'll come like a thief in the night.
Posted by S-townMike at 12/08/2009 08:47:00 AM