Now that Metro has made the May 2010 Nashville flooding maps public, we can compare the Army Corp of Engineer's inundation projection map from a few years ago to Metro's actual illustration. 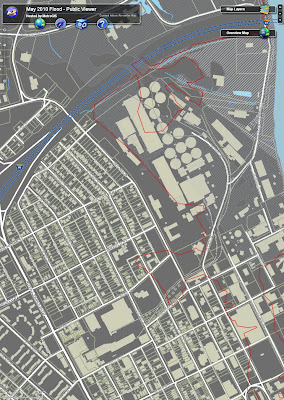 2010 Metro map of flooded North End areas outlined in red
(click on image to enlarge)
The Corps map projects up to 15' over flood stage, while the May 2010 flood reached 12' above flood stage, so the maps seem consistent to me.
I have not seen any local reports on how high the crest got to the top of the MetroCenter levee (in fact, there has been no local coverage on the condition of the levee outside of some unexamined reports that engineers pronounced it safe to allow people back into MetroCenter). I assume that the reason MetroCenter did not flood more after the initial weekend rain event was because at 12' the river could not top the levee. On Sunday, May 2 a MetroCenter business owner told me that he had been on the levee and estimated the river to be about 6 feet from topping. The local Fox News station in MetroCenter showed footage on May 3 of their portion of the levee eroding from inside. The river did not crest until Monday night after MetroCenter was evacuated (jump to some photos of the river up against the levee on the morning of May 3).
While the 2010 flood did send a few Salemtown residents scurrying for higher ground and caused many of us some anxious moments at the prospect of evacuation, 3 more feet of water would have headed up farther into the center of the neighborhood if the 2007 maps are accurate. The lesson: it is imperative that our community support all efforts to maintain the dams upriver, especially Kentucky's Wolf Creek facility was could pose disaster for us more catastrophic than the May 2010 flood.
Here is the Metro photo of the sections of Morgan Park and Salemtown flooding as the stormwater sewers to the river backed up toward us. 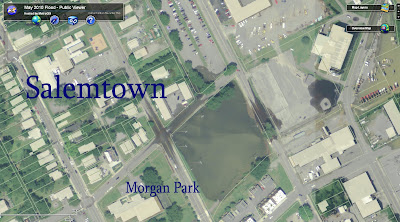 It looks like it was taken in the afternoon before police shut down 4th Avenue, North, 3rd Avenue, North, and Hume Street (jump to a later photo taken at closed down Hume and 4th intersection later that evening closer to crest).
For many of us this was too wicked close for comfort.
Posted by S-townMike at 5/19/2010 07:24:00 AM