The intersection of 4th Avenue North and Hume Street seems to be the 1st point of flooding for Salemtown due to the Cumberland River's rise. Despite the fact that rain and run-off to the depressed park ballfield ended last night, water has continued to rise and the sewers on the corners stopped gulping water as they did over the weekend. I don't claim to be an engineer, but it looks to me like the flooding is due to a combination of water table rise and the river backing up toward Salemtown through our storm sewers. 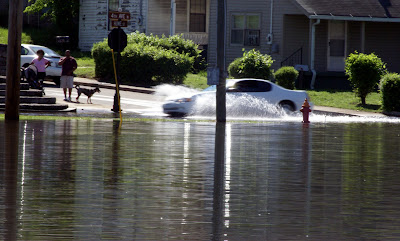 The rising water is also driving tenants of the partially inundated Shiloh Apartments like this fellow to voluntarily evacuate (photo credit: Donna Keeney). According to news reports, the Cumberland River is suposed to crest between 8:00 and 11:00 tonight, although dam engineers up river have talked about releasing more water into the Cumberland to relieve pressure. 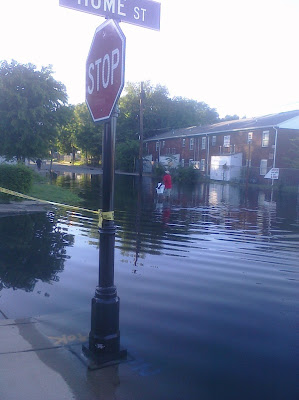