Early on Monday morning, May 3 I walked several blocks from home to the rapidly rising Cumberland River to document the disaster. One of the first things I encountered was a large, flatbed 18-wheeler loaded with a number of bins labeled "used fuel filters" being hauled out of its submerged spot at a 2nd Avenue North cement plant. A plant employee told me that several large trucks had been submerged and showed me how wheel and engine lubricants were washed out and needed to be addressed by mechanics.
Later that afternoon when I returned to the area, I encountered a heavy petroleum smell and I saw black and red liquids floating around the flooded portions Downtown Connector Greenway, which parallels 2nd Avenue. Around a half dozen U.S. Coast Guard officials were present observing and filming the spillage. Metro Water Services employees floated large white cloths on the flood waters. The next day as flood waters receded I observed another crew of MWS workers in heavy boots and gloves, using cloths to mop petroleum spills. I have since learned that a number of companies keep fuel containers on the river and that fuel had likely leaked out into the environment during the flood.

A few days ago I made my way back to the Greenway to get pictures of any remaining visible spillage. Even though the area had got some rain since May 3, the pictures show that environmental problems still remain. Not being a specialist, I do not know how much fuel was spilled on the greenway, nor do I know what other chemicals might be in the soil. The following pictures show some of the strands of tar-like substance that remain on the greenway and its trees. 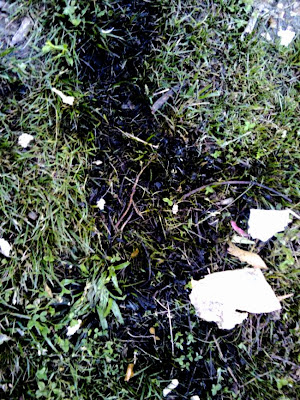 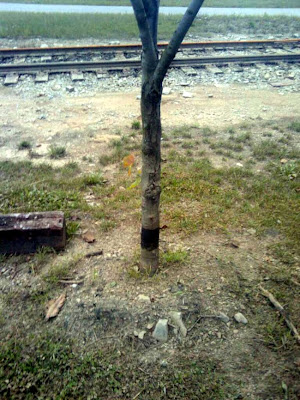 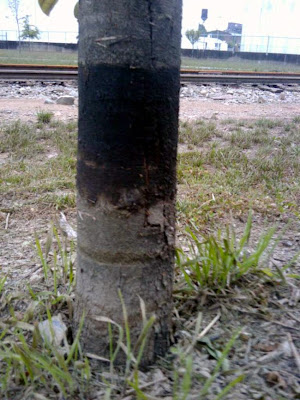 I sent the following questions last week to my council member, Erica Gilmore, and I'm still awaiting some answers.