Council staffers do not usually allow roll call vote tallies to stay visible very long after votes are made, so getting a snap shot of actual votes is a rare thing. But thanks to an Enclave reader, we have a record of last night's vote on CM Moore's attempt to amend the Fairgrounds bill with language that would have left the possibility of keeping the racetrack out of any master plan generated when the Fair Board, Parks, and Planning Department meet with citizens. 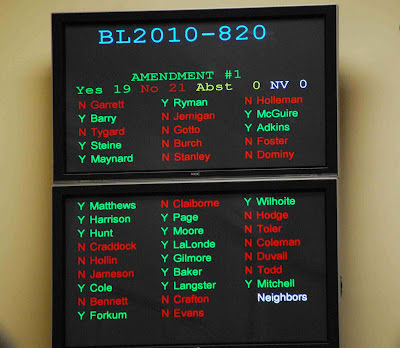 Names that stand out to me of those voting "Y", that is voting not to give citizens the widest latitude in determining a master plan for the Fairgrounds, include: Megan Barry, Ronnie Steine, Jerry Maynard, Erik Cole, and Kristine LaLonde, progressives who rarely if ever vote against Karl Dean, who governs conservatively. Note that District 19 Erica Gilmore also voted with the Mayor's demolition plans.

As you can see by the results, Moore's amendment failed, and an alternative amendment sponsored by Jason Holleman, which calls for a community-informed master plan but removes a demolition mandate completely out of the bill, passed handily 29-11. 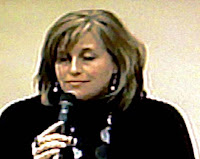 These series of events prompted several CMs to express words of support for CM Moore in spite of her defeat. Those attempts were practically thwarted when CM Barry lost her composure and rose to exclaim, "If you really do support Sandra Moore you would support her amendment!"

UPDATE: While CM Barry made CM Moore's amended bill a personal matter rather than a matter of political compromise last night, less than 2 weeks ago she expressed a different, stoic tone when asked about the prospect of having to lose the promise of racetrack demolition:


Megan Barry, the sponsor of a pending bill to tear the racetrack down, said if the council votes to save the speedway, then the park will be designed around it.

“I don’t think we’re doing anything we shouldn’t be doing, obviously, as things develop. If we have to change the plan, that’s part of what the consultant would have to consider,” Barry said.

Apparently, CM Barry was not as ready to roll with the actual punches last night as she said she was earlier this month.
Posted by S-townMike at 1/19/2011 08:42:00 PM