Local blogger Jay Voorhees analyzes those Metro e-mails that I posted on Google Docs and breaks news, previously ignored by Nashville's news media, that indicates that Buck Dozier and the former State Fair Director of Marketing did not take seriously the democratic process of collecting citizen feedback for planning and development last September:

Mr. Dozier and staff were not enamored with the report from the Nashville Civic Design Center. This report arose from public meetings on the future of the fairgrounds at the behest of the Mayor’s Office of Economic Development. During the “public” portions of this process there was criticism by those now known as preservationists that the there was inadequate opportunity for public comment. The report was supposed to guide the Fair Board and Mayor on future directions, ultimately suggesting that a master plan needed to be developed.
When the report was leaked to the press and then rushed into release, a former staffer emailed Mr. Dozier and asked, “Did you have to pay for THAT?” Mr. Dozier replied that the fair board was indeed charged for producing the report and that it cost around $30,000 to produce. “You can pick yourself up off the floor,” he joked when mentioning the cost. In a later e-mail he told another staff member that apparently they had paid over $30,000 to learn that “…Metro needs to hire a planner.” The report seemed to have little impact on discussions about the future of the fairgrounds.

Mr. Dozier has been accused by Fairgrounds supporters of deliberately running the facility into the ground. In that context it is hard to read these e-mail exchanges and not wonder whether he wasted tens of thousands of Metro dollars on a civic design process that he never took seriously. 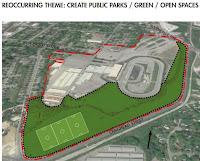 It also warrants asking the Mayor's council supporters like Megan Barry, Erik Cole, Ronnie Steine, etc. why they never bothered to ask what happened to the community-informed design process, but instead just went along with Karl Dean's bidding.

And there is something relevant here for North Nashville/Bicentennial Mall residents. When discussions for a new Sulphur Dell ballpark revved up before last May's flood, some of us involved in those discussions asked that the Nashville Civic Design Center be brought in to lead us through a community meeting process to answer questions, address concerns, and consider feedback. After I made several attempts to contact him, NCDC Design Director Gary Gaston replied to me by saying that he had been consumed in the Fairgrounds design meeting process.

He also said that his organization was conducting a design competition for the ballpark that would be presented to the community at the end of 2010 (presentation has yet to happen). NCDC has a ballpark event on its March 2011 calendar, but there is no indication that a community planning process will take place. However, if the ballpark development process emerges and follows the script laid out for Fairgrounds planning, North Nashville participation may be rendered a moot mockery by the wasteful courthouse elite.


CORRECTION: Gary Gaston asked me to correct one of the details in this post. He e-mailed that NCDC has not been conducting a competition. Here are his comments from October 2010:

We are working with our partners at the University of Tennessee College of Architecture + Design to host a design studio of student projects on the topic of a baseball stadium. A group of 14 graduate students are currently analyzing two sites (Sulfur Dell and North Gulch) and will be designing baseball stadiums for each site. (The SoBro site was excluded because so much study has been done in that area already, and the city recently submitted a grant that would pay for a complete master plan for SoBro - we felt the idea of a baseball stadium would be addressed during that process).