Last week I attended the public hearing on the North Nashville Community Plan. It did not appear to me that very many citizens attended on the subject. 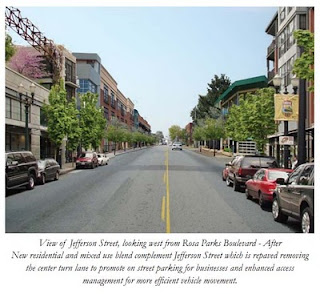 No one spoke in favor of it. The only opponent, Bruce Wood, spoke in opposition to it based on his view that there is a fundamental disconnect between per capita income levels, workforce and health of North Nashville residents and that of the rest of Nashville. He insisted that the plan does not address those inequities. The Planning Commission disagreed with Wood and voted unanimously to approve.

The full plan passed by the commission can be found on the planning website. Some of the community-informed highlights discussed at the Planning Commission include:
My main concern was with the implications of that last point. It seems like I remember something about collector streets and LED sign allowances, but I did e-mail Metro Planning after the meeting to ask for clarification. A transportation planner replied to me thusly:

We are in the process of updating the Major and Collector Street Plan, which is still scheduled for a public hearing on February 24 at 4 p.m. in the Howard Office Building. We have added and deleted a number of streets based upon feedback from stakeholders and residents. During one of our last reviews, we reevaluated streets that connect into Downtown. There were a few streets added as collectors with the largest one being 5th Avenue beginning at Lafayette and going north through Downtown, through Germantown to Garfield. It is identified as a T4-M-CA2 between Jefferson and Hume. It is a T4-R-CA2 between Hume and Garfield. This means it's within an urban context (T) with mixed use (M) or residential (R) land use policies as a collector-avenue with two travel lanes. Ultimately if a developer were to redevelop property along 5th or Metro to conduct public improvements, the MCSP would help outline what potential elements should be considered and what they may look like. That might include wider sidewalks, improvements to on-street parking, addition of bike lanes, wider planting strips along the street, etc. These decisions would be guided by existing constraints meaning the existing development conditions and whether it is a large or small improvement project.

Sounds innocuous right now, but of course I wonder if there are Metro Codes in our future that call for something objectionable on collector streets. Any thoughts?
Posted by S-townMike at 1/31/2011 10:40:00 PM