How many trademarks do these sign-industry-produced anti-racetrack signs violate?

I've been loath to join recent discussions of campaign yard sign wars that tend to be the focus of racetrack opponents' online expressions of moral outrage. Yard signs are overrated means of conducting a campaign since people usually are not swayed to support or oppose something based on reading them.

However, I do want to draw your attention to a sign that was -- I am told by a well-placed source -- professionally produced by Bobby Joslin, owner of Joslin Signs, for the supporters of the Mayor's plan to demolish the racetrack and sell off the Fairgrounds to private developers. The sign ironically includes a photo of racer and racetrack supporter Jimmy Johnson's car displaying all of Johnson's commercial sponsors. 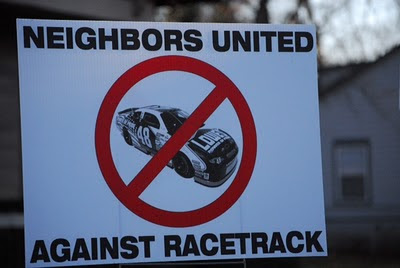