Even Without A Beer License, Norman's Market Allegedly Sells Alcohol From Its Back Door 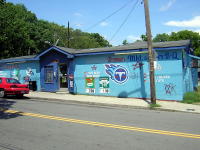 A well-placed source tells me that Kenny Norman has sold Norman's Market (7th Ave., North and Garfield Street) to new owners who do not have a beer license. Nonetheless, the source tells me, the new owners are selling alcohol illegally out of the back door.

The police have already worked with Norman's Market to sign a trespass waiver to run loiterers off. However, I am getting reports from neighbors that people are still gathering in groups to drink around the market and that they merely cross the street to either an MDHA-owned property or private property (especially a corner lot owned by the Nashville Rescue Mission) when they cannot gather at the Market. Last night at 10:00 p.m. I saw three people sitting on the Market property after closing around a picnic table covered with bottles.

If the allegations about illegal alcohol sales are true, the new owners could be in some serious hot water. If I could mount a hidden camera like the boys and girls in the mainstream media, I would try to verify the allegations.

According to an unrelated story in the Tennessean, Norman's Market was raided July 2004 for suspicion of illegal gambling devices and two people were charged. Then owner, Kenny Norman, was not charged at the time of the raid.
Posted by S-townMike at 8/04/2005 03:40:00 PM