Metro Water Services announced that it will be providing a progress update on the Central Wastewater Treatment Plant on Tuesday, August 23 at 6:00 p.m. at the Neuhoff Complex in East Germantown. Water Services will discuss plant improvements, including biosolids management and odor control projects.

Given the periodic problem the North End has with odors, I would be surprised if the meeting is not well-attended.

08/10/2005, 11:00 p.m. Update and Repost: Shannah S. is exactly right in her comments below: the rest of us in Salemtown--even those who do not experience the smell as frequently as her side of the neighborhood--need to step up and attend this meeting. The smell is bad enough when it drifts as far as Germantown on the worst days, and I cannot imagine being any closer during those times. It is unacceptable that anyone in Salemtown should live with sewerage odors for any regular period of time.

I am also reposting below a picture that I took of the drainage problem to which Shannah refers. I originally published the picture in May (I snapped it at the beginning of March) as an example of one of the worst water run-off problems we have in the neighborhood. And it's our problem; not just Shannah's. It adversely affects the quality of life for our whole neighborhood and has needed Metro attention for too long. 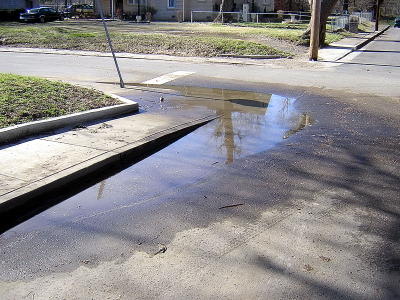