Should You Ever Have To Deal With Metro's Sewer Repair Crews, Consider The Following 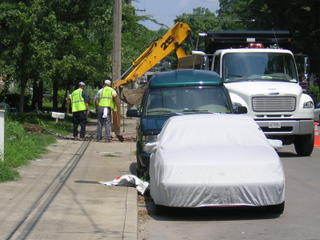 On July 21, Metro Water and Sewer (MWS) repaired the connection between a sewer trunk line leading from a house to the main line under 5th Ave., North. I observed sewerage seeping out of the line on to the ground for several days beforehand. When I arrived on the scene, I asked one of the employees working on the sewer in the picture above what the problem was. He pointed to the end of the trunk line that lead from the house and told me that the line had never been hooked to the sewer. He said that it was the fault of the contractor hired by the builder to finish the plumbing. Neither the contractor nor the builder were present at the time to confirm.

The reason I mention the lack of confirmation is that I have heard you cannot necessarily take a Metro Water and Sewer worker's word for it. A couple of builders have told me that when MWS responds to a sewer problem, they tend to begin by blaming the problem on the builder, the contractor, the plumber, the owner, or anyone else but themselves before they even figure out what the problem is. They essentially posture themselves out of the responsibility equation.

That had already been confirmed to me last fall when I was present when MWS responded to another sewer backup problem near my house. The builder was present when MWS showed up; he told me beforehand that he had to be present because MWS workers were not trustworthy to accept responsibility for mistakes they might have made in the past. Sure enough, as soon as the MWS workers got out of their truck, they started asking what the builder had done to cause the problem in the first place and generally suggesting that it looked like it would not be a MWS problem. After they killed some time checking out the trunk line from the house under the yard--even though the builder had already checked the trunk line--they started breaking through the asphalt on the street and sidewalk and digging to check the main pipe.

When they finally reached the main sewer line, all kinds of unmentionable waste products spewed and poured into the hole. They found that the main line had been crushed, probably by the original MWS crew that had filled the first hole after the trunk line was connected--and the builder had indeed connected it--to the main sewer line when the house was being built. The line could have been crushed merely because it was old; Salemtown is an old neighborhood. Nonetheless, I didn't hear a single word from MWS about it not being their fault after the hole filled with sewerage. The lead members of the MWS crew immediately distanced themselves from the hole and sent those who seemed to be the lower-pecking-order crew members down to clean up the mess so that higher-pecking-order crew members could then repair the pipe.

The moral to this story for those buying new houses in the North End: if you have a sewer problem, be sure that all involved parties (builder, plumber, contractor, and MWS) are on hand; expect a lot of finger pointing, but never expect Metro Water and Sewer to claim responsibility until they absolutely have to. Make sure all the witnesses are there, because if you don't have the other involved parties present, nobody but you will be there to hold MWS responsible for mistakes even if the mistakes were their responsibility.

I'm not saying that all MWS workers are irresponsible or that all plumbing mistakes are attributable to MWS. I'm just saying. I've not heard good things about the sewer workers. I've been even less impressed with the MWS workers I have encountered. They seem to carry the moral compass of your average eighth grader.
Posted by S-townMike at 8/02/2005 03:40:00 PM