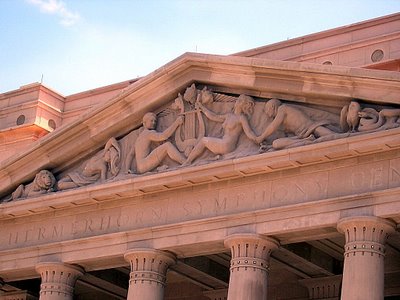 One of the panels on the still-under-construction Schermerhorn Symphony Center downtown. I am guessing that this panel depicts the Greek myth of that musical charmer, Orpheus, who went down to the world of the dead to bring back his wife, whom herself had been killed by a serpent. The three-headed dog at the top would be Cerberus, Hades' (lord of the dead) watchdog, whom Orpheus lulled to sleep with his lyre in order to get in. The story ends tragically as Hades, impressed by Orpheus' musical prowess, allowed him to take his wife, but not look back; Orpheus, of course, looked back and lost his wife again. The male figure on the right may be Hades pulling her back. So, what does this tell us about musicians? That they are quite charming but otherwise foolhardy and incontinent?

By the way, this is the second piece of recent large public art in Nashville to depict nudity (the first being "Musica" over on Music Row). I wonder if it will generate another outcry among the prudes?
Posted by S-townMike at 6/14/2006 12:22:00 PM