The [friendly, personable, passionate and very witty] Gore who appears in the film [An Inconvenient Truth] to outline his dedication to educating the world about the dangers of global warming could not be further from the person America saw running for president in 2000.

Al Gore was not just seen a certain way. He was also mercilessly spun by conservative talk show hacks. And the main- tamed-stream media tended to channel that spin without so much as a critical second thought.

From the misuse of a 1980 Tennessean misquote about Erich Segal's Love Story to the perpetuation of New York Times and Washington Post misquotes on Gore's claims about investigations of Love Canal to the deliberate and willful obfuscations of Gore taking credit for fighting for funding for Arpanet (the emergency military precursor that became the Internet), Al Gore was spun and misrepresented by the media as some kind of blowhard that he was not. And the 21st Century political climate being the dystopia that it is, any hint of stiffness on top of alleged false braggadocio becomes a mortal sin for the viewing audience.

During elections Americans seem to allow the media to strap them down like Alex DeLarge in A Clockwork Orange, drugging them with news as entertainment and with the staged world as the real world while manipulating the pictures to produce aversion and attraction (in Gore's case, the images produced were largely averting). 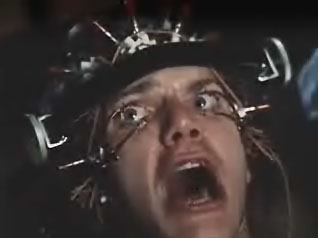 The campaign action projected in front of us in this Ludovico Technique stands or falls on whether it is pitched in a "believable" way or if the actor can at least lower our expectations and distract us by intentionally bumbling words and screwing up aphorisms (as George W. Bush did so masterfully).

That fundamentally tilted the election of 2000. News was pitched through a haze of entertainment and contorted imagery, and large numbers of people submitted themselves to proverbial straps and eyelid retractors. As image/information gatekeeper, the press was only happy to oblige. NCP's Jared Allen only alludes to this when he talks about the berating Gore got in the press, but Allen's earlier bad choice of words, and his later blame of Gore for not fighting a mechanism he did not maintain show that Allen seems to be talking out of both sides of his mouth.
Posted by S-townMike at 6/21/2006 02:45:00 PM