This past Wednesday night's public charrette on the Music City Center Committee's plans for a new convention center was held at the Adventure Science Center south of Downtown. The turn-out seemed lower than expected, as the crowd occupied about half of the tables set up for the event. A spokesperson from the MCCC presented their proposal after which the audience, broken up into small groups, discussed and made recommendations on design, placement, integration, and other aspects of having a downtown convention center.

I got the distinct impression from the MCCC presentation that the question of the convention center is not whether we are going to get one, but how and when we are going to build one. The spokesperson said that we lose hundreds of conventions a year despite the fact that entertainment is one of Nashville's largest industries. Nashville, according to the MCCC, is one of the three most requested destinations by conventioneers (Las Vegas and Orlando are the others), even as most large conventions go somewhere else because of downtown's antiquated convention space. The MCCC spokesperson said that Nashville's status as "Music City" had a lot to do with the demand.

The small group that I was in seemed concerned that the committee had only recommended one site, which is highlighted in hot pink on the map of south downtown below. The general concern was that the proposed footprint would eat up a major chunk of a neighborhood that is widely acknowledged to be the next residential/retail hot-spot in the city. During his presentation, the committee spokesperson said that the reason for their selection was that the spot sat in close and convenient proximity to downtown hotels, restaurants, and other entertainment venues and that this was an important quality for perspective conventioneers. My group's question was whether the relatively short life expectancy of the proposed convention center (20 years) justified the risk to longer-term So-Bro development.

One of our group members said that he was a regular conventioneer, and that what mattered most to him was not the center's close placement to hotels and entertainment venues. What mattered more to him if he were attending a convention here was that the hotels all be located close to each other and close to entertainment venues (he mentioned the Wildhorse, Bourbon Street Blues and Boogie Bar, and Tooties). Indeed, many of the major hotels and entertainment venues are located in the rectangular corridor north of Broadway, between the river and the Gulch. The convention center did not have to be close to any of those locations. He suggested that the convention center could be placed across the river on the current Steiner-Liff property (#1, highlighted in green on the map below), which has a larger footprint than the current site, but it would not eat up a major section of downtown. 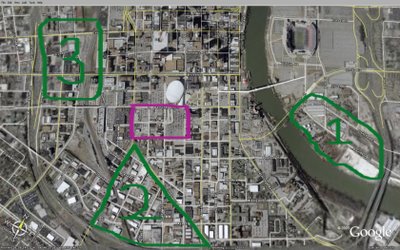 Our small group seemed to agree that moving the convention site to the current Steiner-Liff property would solve several problems. It would protect So-Bro development. There would be more space for the considerable loading docks that are needed by convention centers. Parking challenges would be addressed by the acres of parking lots around the Coliseum; no massive parking structures would be needed in higher density downtown. And the current blight sitting on the east bank south of the Coliseum would disappear.

Our group also recommended two other alternative center sites. We thought that moving the center a little further south to the triangular space between Lafayette St. and 8th Av. (#2, highlighted in green on the map above) would protect development in the So-Bro/Rutledge Hill/Rolling Mill Hill corridor. The strengths of that alternative include size for expansion and for parking, as well as access to I-65 south and I-40 east and west. Our third alternative (#3, highlighted in green on the map above) came from a recommendation made at the first charrette: moving the site to the currently underdeveloped north Gulch area.

If we are going to build a convention center, let's make sure that we put it in the best place not just for conventioneers, but for local mixed-use neighborhoods and downtowners, too. The MCCC spokesperson said during his presentation that he could not imagine a better thing than conventioneers bringing outside money into Nashville, spending it, and then leaving. I believe that those of us who live here and who have a greater investment in our urban neighborhoods can imagine an even better thing.
Posted by S-townMike at 6/02/2006 09:40:00 AM