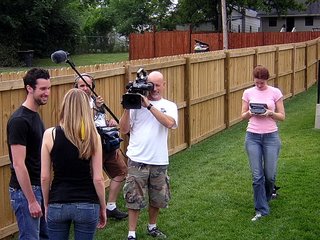 Two of my relatively new neighbors, Jeff and Morgan, found their house in Salemtown with the help of HGTV's production, House Hunters, so they've been spending time lately with film crews. They invited us to a house warming party, which was being filmed for the last segment in their episode, (to air at some undisclosed date later in the year). Did you know that HGTV was based in Knoxville? I just found that out today. 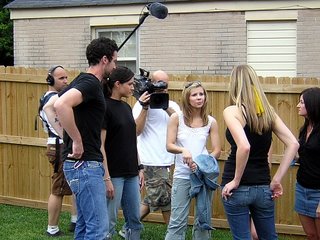 I wasn't jealous at all of Jeff and Morgan getting the air time. They are a vibrant couple who look good in pictures. I was completely jealous of how great their grass looked. I couldn't find a single weed. 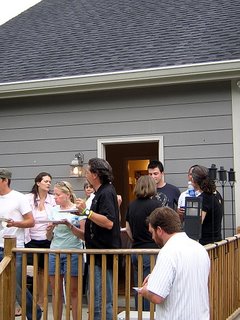 The guests were well-fed and well-behaved. The man in black at the deck rail is the renowned John H. of the blog Salem's Lots.

I was amazed that the rain held off for the filming.

It must have been meant to be; apparently, there are no accidents on HGTV. 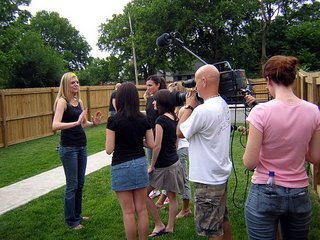 Morgan chats it up with her captivated audience in real time and for broadcast time. I think that their dog, Stinky, stole the show.
Posted by S-townMike at 6/18/2006 09:40:00 PM