Tennessee General Assembly Has Not Yet Preempted Local Food Control 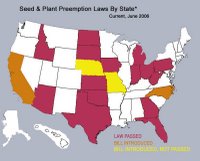 According to Environmental Commons, 15 states have already passed legislation to preempt and prohibit local regulation and restrictions on seeds and plant species. These laws are the result of a two-year effort on the part of lobbyists with the American Farm Bureau Federation and biotechnology industries to stop local communities from specifically regulating genetically modified foods (GMOs).

The harshest restriction of local autonomy seems to be a Texas law, which states: "a political subdivision may not adopt an ordinance or rule that restricts the planting, sale, or distribution of noxious or invasive plant species." Texans cannot even stop "noxious" or "invasive" plants from being put upon their municipalities and neighborhoods?

I searched for evidence of trends in the Tennessee General Assembly that might suggest that the agribusiness and biotech lobbyists were trying to generate legislation, but I could not find any. The most I could find was a passing reference to the controversy around GMOs in a January 2004 Economic Report to the Governor (p. 33). Even if there is no indication of a drift that way, one would have to assume that Tennessee is probably in play for these lobbyists, especially with the corporate-friendly environment that exists up on the Hill. Three states bordering Tennessee have either passed preemption laws or flirted with doing so.

Environmental Commons has a continuously updated bill tracker for each state. We need to keep our eye on it and challenge any GMO-related bills that come up in future sessions. I've added the tracker to my sidebar for your convenience.
Posted by S-townMike at 6/20/2006 12:30:00 AM